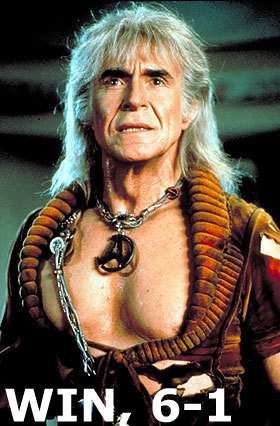 Braves fans must have figured Monday's series opener at Turner Field was a playoff game, since few of them bothered to show up. A crowd that could have easily fit into a jury box was treated to some excellent pitching performances in the early going. Both Dillon Gee and Tommy Hanson pitched well enough to win, but only one of them made one mistake too many. See if you can guess who it was. I think you'll be pleasantly surprised!

After a tidy 1-2-3 first inning, Gee experienced a hiccup in the bottom of the second when singles by Brian McCann and Jason Heyward and a walk to Eric Hinske loaded the bases. That allowed the first Braves run to score when Jack Wilson hit a dribbler up the middle that traveled too slow and shallow for a double play.

Gee escaped without further damage in that frame and was solid thereafter. He got some help in the fifth when a potential opposite field home run by (brace yourself) Jack Wilson was pulled back by an Endy-esque catch from (brace again) Jason Bay. I'd call it a Web Gem if anyone still watched Baseball Tonight. I kid Mr. Bay often, not because I think he's a bad guy; I just think he might not be very good at baseball anymore. But he followed David Wright's example and decided to play through some finger pain, so I tip my toque to you, ya hoser.

Tommy Hanson was just as good as Gee, if not better, allowing only one hit through the first five (a Wright single in the top of the fifth). Luckily, the Mets managed to take advantage of Hanson's own missteps when Kirk Nieuwenhuis walked to lead things off in the top of the third and advanced to second on an errant pickoff throw. Gee laid down a perfect sac bunt in you-know-who's direction to move Capt. Kirk to third, and Ruben Tejada hit a grounder that allowed him to score.

The Braves' young ace did not look human again until he ceded a one-out double to Tejada in the top of the sixth. Then with two outs, Atlanta opted to walk the red-hot Wright and face the luke warm Ike Davis. Hanson threw Davis nothing but curve balls, and Davis parked the last one into the nigh-empty right field stands for a three-run shot, giving the Mets a 4-1 lead.

Hanson faltered once more in the top of the seventh, allowing one-out singles to Josh Thole and Nieuwenhuis. Gee bunted them into scoring position, which allowed Thole to scamper home when Hanson bounced a pitch beyond McCann's reach.

Given a lead, Gee set down the heart of the Braves' order in the bottom half, but experienced the kind of luck in the seventh that only seems to happen to the Mets and only in Atlanta. After a leadoff single from Dan Uggla, he appeared to induce a double play grounder from Heyward, except that the home plate umpire called catcher's interference. (It was a correct call, as replays showed, the second such call against the Mets in the last week; c'mon, Thole.) So instead of two out and nobody on, the Braves had two on and nobody out. This had the flavor of a classic Turner Field screwjob, but Gee responded by striking out Hinske. getting Wilson to groundout, and fanning pinch hitter Juan Francisco to put out the fire. An impressive ending to an impressive night on the mound.

The Mets batters went quietly against old friend Livan Hernandez in the top of the eighth, but Jason Bay opened the ninth by taking him deep to straightaway center field. The Braves, meanwhile, put up no such resistance against the Mets' pen. Jon Rauch took over in the bottom of the eighth and finally allowed his first hit of the year, a leadoff single by Michael Bourn. The speedster swiped second and third while Rauch paid him no mind, setting down Martin Prado, Chipper, and McCann in order. Tim Byrdak retired the Braves with little incident in the ninth to conclude a satisfying 6-1 win in the series opener.

If you're keeping score at home, Mets starters have allowed one earned run or fewer five games running. I find that stat surprising, but not quite as surprising as the fact that they've also taken 12 of their last 18 against the Braves which, crazy as it might sound, includes a few games played at Turner Field. Within the last year, it seems that the Mets, for all their other issues, have come out on top in this ol' rivalry more often than not. Dare we think the Mets might have Atlanta's number? To find out, tune in to tomorrow's exciting episode of "House of Horrors." 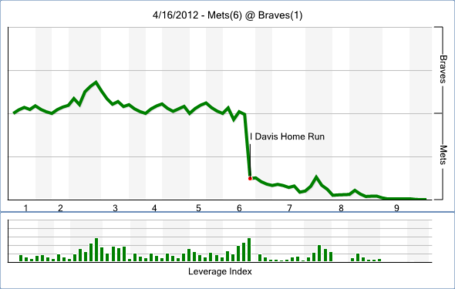