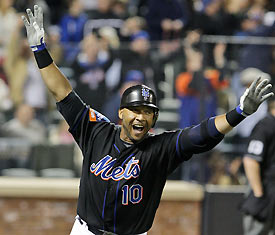 Remember when Gary Sheffield was on the Mets? It's one of those Brett Favre-on-the-Jets type marriages that makes you say "did that really happen?" Sheff joined the Mets just before Opening Day in 2009 after being cut by the Tigers. Costing only the league minimum of $400,000, it was seen as a low-cost, medium-benefit signing for a team with the punchless Marlon Anderson on its Opening Day roster. At the time, Sheff was stuck on 499 home runs, just one short of that magical and arbitrary 500 milestone. It didn't take long for him to get there, as he hit a pinch-hit home run in his eighth plate appearance as a Met on April 17, 2009.

It was a chilly Friday night game against the Brewers. The Mets were down 4-3 entering the bottom of the seventh inning with lefthanded relief pitcher Mitch Stetter entering. Sheffield was sent up to the plate to pinch hit for Sean Green (LOL) to lead off the inning. With the count 3-2 after eight pitches, Sheffield rocketed Stetter's ninth offering 385 feet into the left field seats at Citi Field to tie the game and join the 500 home run club. He received a nice ovation from the 35,000+ crowd in what was just the fourth regular season game in Citi Field history. His teammates came out to greet him, with on-deck batter Jose Reyes offering a hug and Daniel Murphy administering an ass slap. Thanks to embeddable MLB video we can relive Sheff's moment:

Note the theme from The Natural playing on the Citi Field sound system as Sheffield rounds the bases. The home run helped the Mets win the game, which ended on a game-winning single by Luis Castillo in the bottom of the ninth inning. The win evened the Mets' record at 5-5 at a time when there was still reason for optimism. Carlos Delgado, Carlos Beltran, and Reyes were healthy. The full extent of Jerry Manuel's insanity was not yet apparent. And Sports Illustrated was predicting the Mets to win the World Series. Sheffield was viewed as a potentially valuable pinch hitter and occasional spot starter on a team with a chance. Unfortunately, everything went to hell and Sheffield ended up playing way more than anticipated. He logged 312 plate appearances and posted a useful .823 OPS while playing defense about as well as could be expected from an immobile 40 year-old.

Sheffield had reportedly hoped to use his time with the Mets as a showcase to land a free agent contract the following offseason. But it was not to be. Despite rumors of interest from the Rays and Nationals, he never caught on with another team. 2009 was Sheffield's final MLB season.