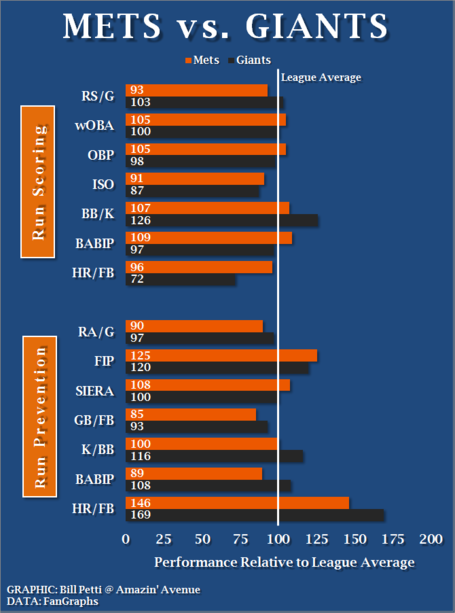 The Mets lost their second series of the year, losing the last two games of their recent three-game series against the division-rival Atlanta Braves. Johan Santana looked very human, leaving a number of pitches over the heart of the plate which Braves hitters were more than happy to feast on. Additionally, Atlanta roughed up R.A. Dickey in the final game of the series, as Dickey was clearing lacking his best stuff. The offense averaged five runs per game against the Braves, scoring six runs twice. Over the past two seasons, teams that score six runs average a win 74% of the time, but obviously that rate decreases when you give up a 14-spot to your opponent.

Enter the Giants. San Francisco looks very similar to what we've come to expect from them; great pitching and league-average offense. However, after locking up ace-caliber Matt Cain and young star in the making Madison Bumgarner, the Giants front office has to be concerned with the recent performance from rotation-anchor Tim Lincecum.

Lincecum is a very different pitcher than he was when he first entered the league, relying more on his slider and low 90s fastball in recent years. However, Lincecum's fastball velocity has dropped yet again--roughly 2 mph--and currently sits at about 90 mph. And while his strikeout and walk rates have been strong in the early part of this season (10.54 K/9, 2.63 BB/9), he's been roughed up to the tune of a .426 BABIP and a 10.54 ERA.

With both teams roughly average offensively and the series being played at Citi Field, we should be in for a low scoring series. The Mets miss Matt Cain, which works in their favor. Given how the starters line up, I'll say the Mets take game 1 (Niese over Zito), drop game 2 (Pelfrey against Vogelsong), win game 3 (Gee over Lincecum), and win game 4, getting a solid performance from Johan while figuring out the young Bumgarner.

For more Giants coverage, be sure to check out McCovey Chronicles and Wendy Thurm on Twitter.