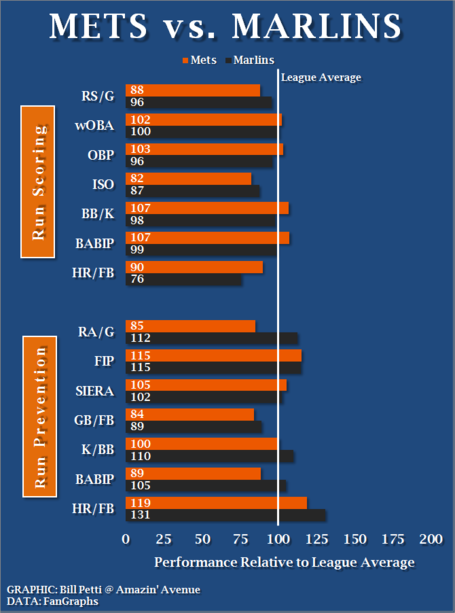 After dropping three out of our against the San Francisco Giants (including both ends of a double-header yesterday), the Mets (8-8, 4GB) begin a three-game series against the Miami Marlins (7-8, 4.5GB) tonight at 7:10pm EST.

Tonight will mark the return of Jose Reyes to Citi Field, in what I am sure will garner a mixed reaction from fans. Obviously, Reyes was one of the most electric and productive players to have played for this franchise and it will certainly sting to see him in a different uniform, particularly that of the Marlins.

In terms of the series, these teams have been quite similar so far in 2012. Both seem to be under performing offensively given their lack of power so far. The Mets have a better HR/FB rate, but their isolated power is still well below the NL average. That fact goes a long way to explaining their low run scoring despite the above average on-base percentage.

The Marlins were supposed to challenge for the division title, and that could still happen. There are signs the offense is begining to come around, particularly in the form of Hanley Ramirez. However, the linchpin to their season is likely to be there pitching. So far, thanks in part to their new cavern of a stadium, they are allowing half a run less per game than league average. The big question mark for them is how many quality innings they will get out of ace Josh Johnson.

So far, Johnson has been, well, un-ace like. Through three starts he is only walking 7.8% of batters faced, but he is only striking out 10.4%. That's really, really bad. And while he has not allowed a home run yet, he has a batting average on balls in play of .444. Combine that with the lack of strikeouts and it's no surprise he has an ERA approaching 6.00.

Johnson will face off against the Mets own recovering ace, Johan Santana, in game one, followed by R.A. Dickey versus Mark Buerhle, and Jon Niese against Ricky Nolasco. As much as I hate losing to the Marlins, I have a feeling they take two out of three against the Mets.

For more great Marlins coverage, be sure to check out Fish Stripes and Marlins Daily.