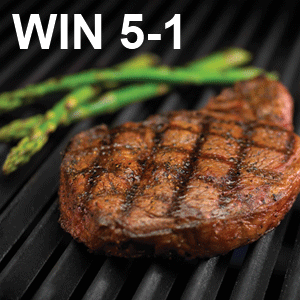 Like Johan Santana last night, R.A. Dickey bounced back from an awful outing last week with an excellent start against the Marlins tonight. Dickey doesn't always generate a ton of strikeouts, but he notched seven tonight and only issued one walk. It's easy to take his control for granted, but Dickey has managed an outstanding walk rate over the entirety of his time with the Mets.

Dickey didn't make many other mistakes this evening, but he allowed a solo home run to Omar Infante in the fifth. It was a no-doubt home run that hit the front of the second deck in left field. Infante now has five home runs on the season, more than half his home run total in either of the past two years.

Despite the fact that the Mets were held scoreless through six innings by Mark Buerhle, it never felt like they were going to lose the game. When David Wright stepped up to the plate with a runner on first and two outs in the seventh, he served up a home run to left-center field that served as a reminder that he owns left-handed pitchers. The pair of rib-eye steaks pushed Wright past Darryl Strawberry as the team's all-time RBI leader.

The rest of the game went fairly smoothly. It was a bit odd that Terry Collins used both Jon Rauch and Bobby Parnell in the eighth inning, but it worked. Collins used Tim Byrdak and Manny Acosta in the ninth, too, and had Frank Francisco warming in the bullpen in case that plan went haywire. The results were fine, but here's hoping the idea of making five relief pitchers throw in similar situations doesn't become a trend.

Last but not least, a tip of the cap to the Mets' bats for giving the team three valuable insurance runs in the eighth inning. They were helped by a timely error by Giancarlo Stanton, but Ruben Tejada, Lucas Duda, and Mike Baxter each had an important hit in the inning.

The Mets have a chance to sweep the series tomorrow at 1:10 pm as Jon Niese opposes Ricky Nolasco in the series finale. 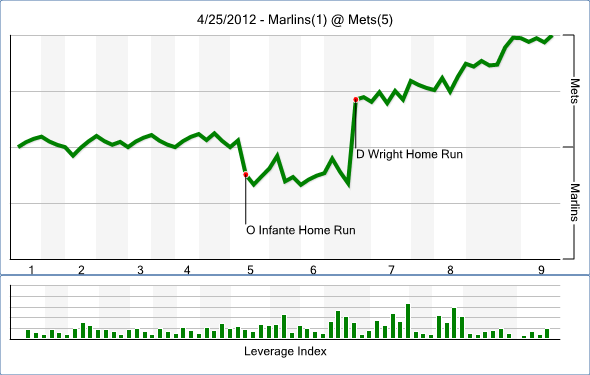