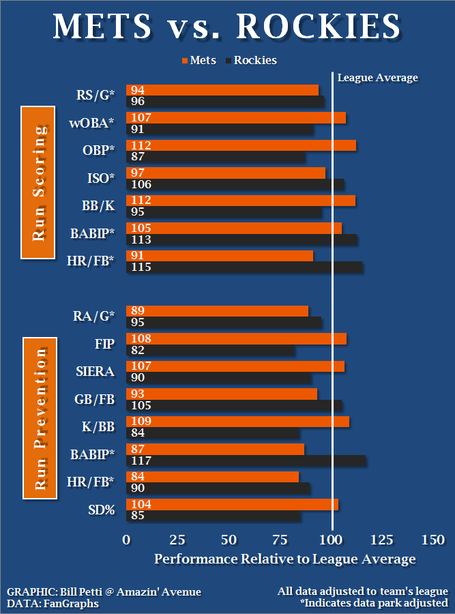 After a thoroughly enjoyable sweep of the Marlins, the Mets (11-8, 3GB) head to Colorado to being a three-game series tonight against the Rockies (9-9, 3GB) (8:40pm EST).

Before we jump into the game, a few notes about the preview above. First, some of the statistics are now park adjusted. Second, I have added a new category--shutdown percentage (SD%). This adds some context around the team's bullpen and simply looks at the percent of shutdowns out of a pen's total shutdowns plus meltdowns. This statistic answers the question, when the pen has a greater than 6% impact on the team's chances of winning, what percent was positive?

Okay, now that we have that out of the way, on to the match up.

Offensively, the Mets inching closer to league average in terms of run scoring. They are showing great patience at the plate--just ask the Marlins--but they are still below average when it comes to power, which seems to account for the below average run scoring.

The good news is the Rockies aren't exactly world beaters when it comes to runs allowed. Their outcomes and peripherals all tell the same story at this point in the season--even adjusting for Coors Field, this team is going to give up their fair share of runs.

The Mets appear to have the edge in run scoring and prevention. Throw in that their bull pen has actually performed above average in terms of shutdowns and meltdowns (I admit I was a little surprised by this), and I think the Mets can take two out of three.

For more great Rockies coverage, be sure to check out Purple Row and Rockies Digest.com

Some statistics have been park adjusted and all have been adjusted for each team's respective league.