Share All sharing options for: Scott Hairston Hits For The Cycle But Mets Pitching And Defense Implode In Blowout Loss To Rockies 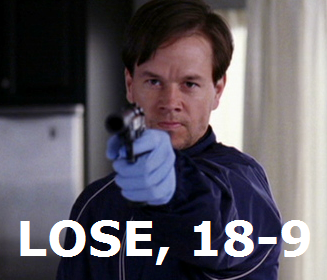 This was a loathsome and offensive game, filled with Rockies home runs, Mets errors, and generally poorly-played baseball. But it was also a game in which Scott Hairston hit for the cycle. The cycle is a rare enough occurrence -- it happens only a handful of times per season in all of MLB -- that it warrants immediate Wikipedia updating; it's worth celebrating at least through the start of the next game. The cycle provided a nice diversion from the 11(!) runs the Rockies scored in the fifth inning and the 6 errors the Mets committed in the game.

There was a point in the game where it looked like the Mets might pull off a fun win on the backs of Hairston, Chris Schwinden, and Mike Nickeas. Our heroes were leading 6-2 following the top of the fifth after putting up a four spot in the inning. Hairston had tripled home a run, and Lucas Duda, Nickeas, and Schwinden tallied RBI singles of their own. However, the strikeout-less Schwinden couldn't keep his voodoo working, and he combined with Manny Acosta to give up all 11 runs the bottom half of the frame. Schwinden's final opponent was Carlos Gonzalez, who crushed a three-run home run 438 feet over the right center field wall to tie the game 6-6. Acosta relieved Schwinden and was a total wreck. He gave up seven runs in relief while recording just one out, exploding his ERA to 9.31 in the process. 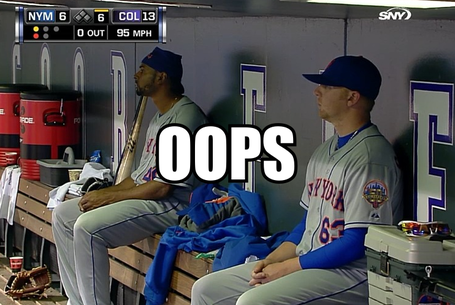 The Mets' defense did Schwinden and Acosta no favors in the inning, committing four errors. Simply throwing the ball to one another became a problem on errors by Schwinden, Nickeas, Ruben Tejada, and Zach Lutz. It was 13-6 when the inning ended. The Rockies' chance of winning the game at the start of the inning (per win expectancy) was just 14.5%. By the end, it was all the way up to 98.0%.

Hairston completed the cycle with a two-run double in the top of the sixth inning but any hopes of a Mets comeback disappeared when Bobby Parnell allowed a grand slam to Ramon Hernandez in the seventh to make the score 18-9. This game was a hot mess. Here are some further bullet notes:

Game two of the series is Saturday night at 8:10 pm. The pitching matchup is Dillon Gee vs. Jeremy Guthrie* Guillermo Moscoso.

* - Guthrie landed on the disabled list late Friday after injuring his shoulder in a biking accident earlier in the day. 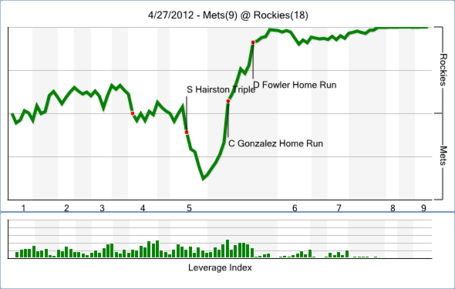