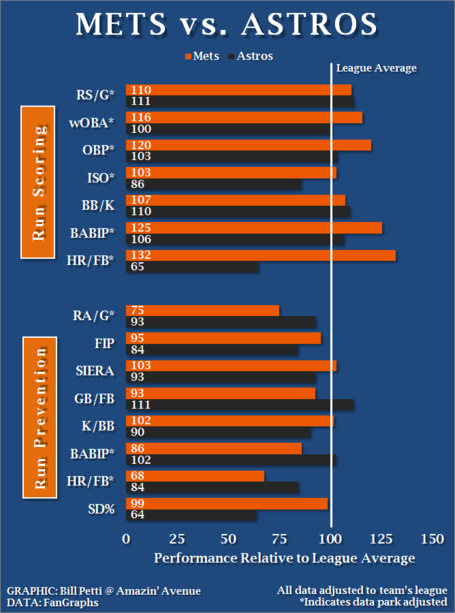 After taking two out of three from the Colorado Rockies, the Mets (13-9, 1GB) travel to Houston and begin a three-game series against the Astros (8-14, 6GB).

One day shy of May, and the Mets have managed to play .591 ball. However, their expected record is actually 9-13, based on their runs scored and allowed. Why are they outperforming their expected record by four wins early on? Simple--they are 6-1 in one runs games. Offensively, the Mets have only scored 88 runs (not bad at all given their park, as you can see from the park adjusted numbers above), but their hitters have a WPA of 1.45 for the year, third highest in all of baseball. Even when controlling for leverage, Met hitters have the fifth-best WPA in the bigs.

Run prevention has been a different story.

Mets pitchers are, however, giving up home runs at a higher rate than last season. Through April 29 this year, the Mets have a HR/FB ratio against of 11.8%. This time last year? 9.6%.

For a team that is obviously in the beginning of a major organizational rebuild, the Astros haven't played that bad to start the season. Offensively, their run scoring is higher than league average, but their run prevention, like the Mets, has been a weak point. Their bullpen, in particular, has not been a big help, with 14 meltdowns against only 9 shutdowns.

With Jon Niese and R.A. Dickey starting games one and two, I have a feeling the Mets can take two out of three.

For more great Astros coverage, be sure to check out The Crawfish Boxes.