Until last year, Justin Turner hadn’t gotten more than a cup of coffee in the big leagues. Drafted in 2006 by the Reds, Turner was flipped to the Orioles with another minor league player and Ryan Freel in exchange for Ramon Hernandez following the 2008 season. Between 2009 and 2010, Turner got 40 plate appearances with the Orioles before the Mets picked him up on waivers early a few months into the 2010 season. At the time, he was a 25-year-old who hadn’t had an OPS above .800 in his past two years in the minors. In 2010, however, Turner put together an .862 OPS season, mostly with the Buffalo Bisons.

Turner played a handful of games with Buffalo to begin the 2011 season, but he was called up in mid-April and played the rest of the season with the Mets. At the end of May, he was hitting .323/.369/.448, which had some folks excited about what Turner could be. The writing was on the wall, though, as Turner’s .361 BABIP would have been nearly impossible to sustain. At the end of the season, Turner’s line was .260/.334/.356, a far cry from his early-season success. 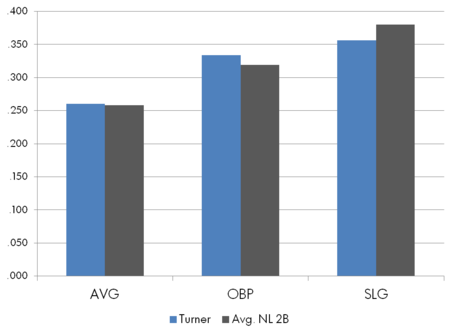 Turner came into the 2012 season with a roster spot all but guaranteed, and he’s set to open the season with the Mets as a backup to Daniel Murphy at second and David Wright at third. While his offensive production last year won’t blow anyone away, it was only slightly below the National League average second baseman. Perhaps that says more about the position than it does Justin Turner, but with even a slight improvement, Turner could be a league-average bat when he fills in for Murphy or Wright. As a starter, Turner was overexposed, but he could be a serviceable role player on the team’s bench.