Not one of our eight writers picked the World Series Champion Cardinals to even make the playoffs last season, but that won't stop us from sharing our 2012 picks!

Bill: Yes, the Phillies are older and already missing pieces on offense for at least the beginning of the season. However, I am not sold on the Marlins and Nationals making a push for the division title this year. The main reason? Neither team will see it's ace throw 200 innings. One by design, the other likely due to injury. The Phillies' big three are both filthy and low injury risks. Barring one of the three going down for a significant period of time, this looks like Philadelphia's division for at least 2012.

As for the Mets, I'd love to see them finish above .500 this year, but I am having a hard time seeing it. My guess is they finish in the 75-80 win area, and that's not a bad thing. If they can win that many games and get good performances out of their young players (Duda, Davis, Niese, etc.) I'll be more than happy. It's not about 2012, it's about 2014 and beyond with a new, young core of players, and if that core takes yet another step in their development this year that will be enough for me.

Chris: I’m not really sold on any of the teams in the division, but the Phillies’ offense is probably going to be awful. I wouldn’t be surprised if they score the fewest runs in the division. While it might be a circus in Miami, they seem like the team with the best balance of hitting and pitching to me. The Braves are a close second since Brian McCann’s the best offensive catcher in the game and Jason Heyward will probably have a monster year. Yeah, I’ve got the Mets ahead of the Nationals. Opening Day is upon us, and Johan Santana is on the mound for the Mets. Whatever.

Eno: This may all be closer than it looks. I'll take the over on 74 wins for the Mets, which doesn't leave a lot of room for the Phillies to win much more than 90. And that dos mean the Braves, Nationals and Marlins may all be in the hunt until late in the season. Should be fun for all of them.

Eric: I'd be more surprised to see the Mets lose 100 games than I would to see them win 81, and they almost certainly won't be as bad as everyone is making them out to be. They aren't likely to be good, though, while the Nationals and Marlins have improved since last season. As long as they're fun to watch - and I fully expect that they will be - I'll slog through a couple of losing seasons while Sandy Alderson and the rest of the front office gets the organization back on track.

James: The Mets will beat the Marlins on the last day of the season to deny them a playoff spot by one game. Fewer than 15,000 fans will be in attendance at Marlins Park.

Matthew C: Like Eric, I think the great weeping and gnashing of teeth about how bad the Mets will be this year is way overblown. I believe their lineup, in particular, will be much better than most people give it credit for--assuming a full, healthy year for Wright, Davis, and Duda. The Mets' rotation was far better in 2011 than people remember, even without Johan Santana (for however long we enjoy him this season). The bullpen has improved marginally, though I still suspect the signings of Francisco and Rauch were meant as midseason trade bait more than anything else (relievers being wildly overvalued these days; oh Sandy, you rascal...). All in all, I believe the Mets will be enjoyable to watch, just as they were for much of last season, which is all fan can reasonably ask for.

And for all this, the Mets will still probably finish in last place with 80 wins, give or take, because of playing in the second toughest division in baseball. The Phillies are banged up and aging, but I think their pitching will still carry them to yet another division win. As much as I hate the Marlins and want them to fail with every fiber of my being, if I'm being realistic, they probably won't. The Nats will be good, but are probably still a year away from serious contention, and I fear the Braves may pay for overworking their young relievers last year. Actually, I don't "fear" that...what's the word?...ah yes, "welcome."

Rob: The Marlins have the most talent, top to bottom, in the division; good health allows them to weather the most widespread parity of any division in baseball and end up on top. Though that's massively contingent on Josh Johnson. The Phillies window will close a year earlier than anticipated as they run out a bottom three offense. And that whole Giants 'great pitching, awful lineup' blueprint doesn't fly in such a competitive division. Braves offense is suspect too but it's their suddenly pedestrian rotation that dooms them with Hudson hurt, Jair fading, Hanson not the ace he once looked like and their pitching prospects still not really ready to help. The Mets are going to be a hell of a lot more competitive than people expect. The MSM doesn't seem to want to admit it but they'll showcase a lot of talent, enough that they'd make noise in other divisions. Even in this one they'll hang around until well after the days start getting shorter.

Sam: It'll be tough but the Mets will pull it off for sure.

Bill: Let's be clear, there are still only eight playoff teams. Two teams in each league will play for the right to be the Wild Card. (Steps down off soapbox.) That being said, I think the addition of the play-in game will make it less likely we see a non-division winner make a run deep into the playoffs, considering they will need to burn their ace just to qualify. Given the pitching upgrades, I like the Reds coming out of the NL. I also like both play-in teams coming from the NL Central. Against the grain, I know. As far as the AL goes, I love what the Rays and Angels will be starting the season with, and both teams have reinforcements that they will likely call on to help make their division runs (e.g. Mike Trout in Anaheim). Overall, I think the Angels are the more balanced team than the Reds and have the edge in run prevention. Halos in 6 over Cincinnati.

Chris: I’ll take the smart bets on Votto, Pujols, and Halladay. Haren’s always been a bit unnoticed compared to some of his peers, and maybe the luck breaks in his favor this year. I copied the ROY picks from James because they seem reasonable.

In the NL Central, I’ll take the Reds because of Joey Votto’s forthcoming MVP year and what is sure to be a great campaign from Mat Latos. The Cardinals will finish just shy of a wild card spot, probably because of Carlos Beltran.
In the NL West, Justin Upton and Troy Tulowitzki are just pretty great. They both carry their teams to a the playoffs this year. Upton gets some help from breakout first baseman Paul Goldschmidt along the way.
The AL East is still bananas, and the top three teams make it because that’s just how it goes. Justin Verlander won’t repeat his dominance from last year, but his year combined with the bats of Prince Fielder and Miguel Cabrera will be enough to win the division despite laughably bad infield defense. It’s tough to pick against the Angels in the West with their rotation and Albert Pujols, but I don’t see the rotation making up for the sizeable offensive advantage that the Rangers hold over the Angels.
As for the playoffs, the Braves lose their wild-card round game with the Rockies because they’re the Braves. The Rays might make it to the playoffs, but Josh Beckett throws the game of his life to push the Sox into the next round.
In the division series, Tulo pulls a Citi Field 2011 on the Marlins and hits four home runs as the Rockies sweep. The Diamondbacks have a harder time with the Reds but come away with the series win in seven. Over in the AL, Yu Darvish throws a gem in game one but bombs in game five, allowing the Red Sox to advance. The Yankees sweep the Tigers.
The Diamondbacks go on to defeat the Rockies in the NLCS on a walk-off home run by Miguel Montero. Robinson Cano leads the way for the Yankees as they take down the Red Sox in the ALCS.
The result of the World Series is the same as 2001: Arizona wins in seven. Ian Kennedy throws a complete game shutout in one of the Diamondbacks’ wins, and the series ends after Mariano Rivera is charged with his only blown save of the postseason. He retires immediately after the game.

Eno: Zack Cozart and Devin Mesoraco are the trendy ROY picks in the NL, but Dusty Baker has Ryan Hanigan to turn to when Mesoraco makes a rookie mistake, and Cozart is an older rookie who had to try Triple-A twice. They may be fine, but will they be excellent? I'll take the guy with impeccable control, a hammer curve, and PetCo park giving him the assist. Crazier things have happened, and will.

The rest of these predictions are impossible. There about 20-25 pitchers that can ride good luck into a Cy Young type season any given year, and maybe half that when it comes to the hitters.

And predicting the postseason, now? Especially with the two-wild-card format? Good luck.

Eric: I was trying to think of Mets rookies who might reasonably compete for the ROY but anyone who's decent has already played too much at the big league level. I couldn't really care less about the award, so I just went with Ken Rosenthal's picks because he seems like a nice guy. The rest of my awards picks are boring, too, so please accept my apology in the form of this adorable photo of a cairn terrier puppy sitting in a mixing bowl: 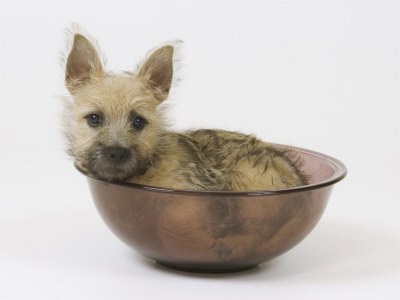 Look, it pains me to pick the Phillies to win it all. I don't feel good about it, and with any luck I'll be proven horribly wrong here and the Phillies will finish in last place and we'll get an offseason photo of Chase Utley riding a Rascal around Trader Joe's. Really, if the Mets are going to be terrible, as long as the Yankees lose in some historically embarrassing way I'll be fine. Like, say, Mark Teixeira lines a would-be game-winning double into the gap, but his pants fall down on his way to first, knocking him to the ground and revealing a frilly ladies one-piece bathing suit (bloomers would work here, too) under his uniform. Then he's thrown out at first and the Yankees lose by a run and Jon Bois has a guaranteed one-seed for next year's GIF tournament.

James: Anyone but the Phillies. And Braves. And Marlins.

Matthew C: On the eve of a season such as this, I recommend watching this inspirational speech from one William Murray: http://www.youtube.com/watch?v=g3S_k1dRbXY

Rob: Obviously I'm still all-in on Jose, Met or not. I expect that he'll pick up where he left off last year, showing the league that a healthy, mid-prime Jose Reyes is a scary thing. And to be honest, I hope he does; I don't begrudge him in the slightest and neither should you.

Sam: Mets beat Red Sox 4-3 for old times' sake: The Red Sox will put up a fight because of Bobby V, but ultimately they'll really miss Chicken and Beer.