With quite a bit of turnover on the roster over the past year-plus, David Wright is now the longest-tenured player on the Mets’ roster. The 29-year-old third baseman was drafted by the Mets all the way back in 2001 and made his debut with the team in 2004. Through the 2008 season, he was an outstanding hitter. His 2007 slash line: .325/.416/.546. That was good for a .420 wOBA, a number which would have blown away nearly all of his peers at third base if he were hitting at that level last year. The 2009-2010 version of Wright was still well above average, but he was playing a notch below the dominant level he had established in years past.

Last year was undoubtedly the worst of Wright’s career thus far. He played in only 102 games, his offensive production slipped substantially, and the metrics suggest his defense was on the decline. On the upside, Wright’s strikeout and walk rates both took a step in the right direction in 2011. In each of the past three seasons, Wright’s struck out far more frequently than he ever had before, but 2010 was the high water mark. His walk rate was the second-lowest of his career, too. 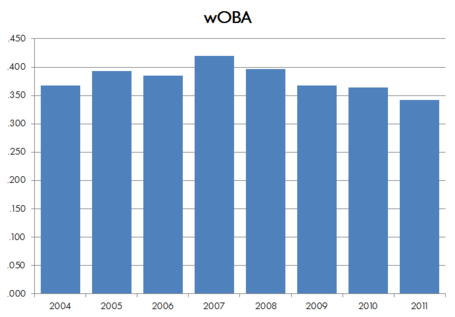 Wright is not expected to return to his excellent level of play from years past this year. Depending on your projection system of choice, he could either be marginally better than last year or similar to the player he was in 2009 and 2010. I’m willing to write off last year as an injury-plagued aberration, and since Wright is right in the middle of the typical prime years of a hitter’s career, I’d expect him to be much more like himself than he was last year. It sure doesn’t look like the pre-2009 Wright will be coming back, but a .375 wOBA season doesn’t seem entirely out of reach just yet.