Let's Dream On A Day One Win

Share All sharing options for: Let's Dream On A Day One Win 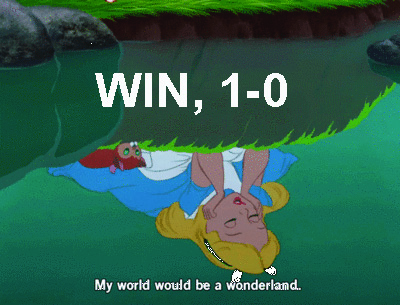 Let's dream on this one.

Let's instead think about how Johan Santana looked great for four innings. Let's imagine that changeup and slider dancing, as it did today, for a full season. He struck out five in his five innings! He only allowed four baserunners. He smiled. He pitched well, up until the fifth inning when he gave up a double to part-time lefty-killer Matt Diaz and then lost control and walked the bottom of the order. Let's remember that weak grounder he got from Michael Bourn to end the inning instead of focusing on the walk to Tommy Hanson.

And the lineup? We could yammer about all the missed opportunities -- and had the score ended up in the Braves' favor, we surely would be -- but we won't. It's more fun to notice that the Mets managed four walks against their six strikeouts, and that they only went down 1-2-3 once. Why point out that six of the seven hits were singles? The made contact! They were patient! Other than Ike Davis and Lucas Duda (oh-for-eight with four strikeouts combined), every regular put his foot on first base.

There will be enough time to feel sad about things like Andres Torres coming up lame and re-injuring his calf muscle on day one. And surely there will be days where we lament the strikeouts from the middle of the order.

Nice job by astromets; that effort in the game thread embiggens us all.