*All results from games played on Friday, April 6th

Send all of your questions about the Mets farm system to AAProspectMailbag@gmail.com to see them answered here! 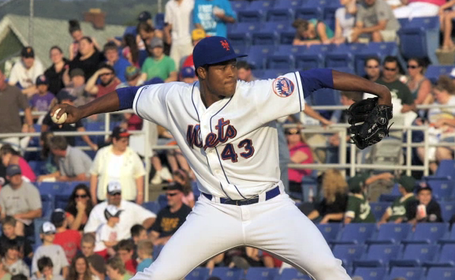 Another shaky night from one of the big three pitching prospects as Familia exhibited similarly shaky command as Harvey in the season opener. In fact he posted an eerily similar line, right down to the number of pitches and only bested Harvey's 56% strike rate but three points. Fortunately, Familia was a bit luckier with his strand rate meaning that the Bisons were still locked in a close one when Raul Reyes -- just off the bus to replace Kirk -- was driven in by Omar Quintanilla in the ninth.

Yet another much anticipated debut in this one and once again the results were a bit shaky. Zack Wheeler labored in this one, allowing two runs in three hard-fought innings. While he wasn't awful, he threw 71 pitches over that time -- just 39 for strikes (55%) -- which obviously isn't a recipe for success. Fortunately the bullpen was up to the task, following with six innings of scoreless, one-hit baseball. Less fortunately, the offense was once again anemic (see, 1-for-9 with RISP) and was never able to make up that initial deficit; I already feel like that sentiment is going to get old fast.

The Mets got to face off against the rehabbing AJ Burnett in this one and though they only got him for one run in four+ innings, they managed to beat up on the Bradenton 'pen instead. Specifically, '07 fourth rounder Richard Lucas picked up three steaks as one of three St. Lucie batters with multiple hits. Meanwhile 24-yr old starter Gonzalez Germen was very strong, allowing just one run over six innings. Interestingly, righty Taylor Whitenton made his 2012 debut in relief after an excellent 2011 season in the Savannah rotation. Ultimately, he's a reliever long-term anyway but it will be interesting to see if he gets any starts this season.

Savannah pulled ahead early in this one thanks most notably to a bases loaded double from Aderlin Rodriguez. 21-yr old starter Rafael Montero held that lead nicely with 5.2 innings of solid two-run ball in his Lo-A debut. Unfortunately, things took a turn for the worst when reliever Estarlin Morel blew up in the ninth, allowing three runs and letting this one slip away.

Still waiting on that first breakout offensive performance of 2012. So instead we'll go with the best start in the system so far this season which came from St. Lucie's Gonzalez Germen in his six inning, one-run game. Again, he's a little old and lacks the secondary stuff to start at the highest levels but he continues to get results and is leaving the door wide open for a major league relief role.
Goat of the Night
Estarlin Morel's late inning hiccup last night cost the Gnats the game and earned him the horns today.