The Mets Beat The Braves Again, Look To Sweep Tomorrow

Share All sharing options for: The Mets Beat The Braves Again, Look To Sweep Tomorrow

At first, it looked like all that was good about Opening Day was going to disappear. Michael Bourn led off the game for the Braves and hit a seemingly routine fly ball to left field. Jason Bay, however, made the play look anything but routine. He made an awkward attempt to get the ball and missed, giving Bourn two free bases to start the game. The play was one of countless plays that serves as an anecdotal example of the flaws of errors. Bay wasn’t charged with one, but there’s no question that he made a very poor defensive play.

R.A. Dickey was able to work around the miscue, though. Bourn moved to third on a Martin Prado groundout, but he was thrown out attempting to take home when Josh Thole mishandled an R.A. Dickey knuckleball. Thole struggled to catch the knuckler at least a few times in Dickey’s six innings of work,. To Thole’s credit, he recovered quickly as Bourn broke for the plate and made a perfect throw to Dickey, who did a great job of applying the tag in time to record the out. The play was the Braves’ best scoring opportunity until they finally broke through in the fifth inning.

David Wright picked up right where he left off on Opening Day, and his opposite-field solo shot in the first inning brought back memories of Wright at his absolute best. Wright went 3-for-5 on the day, and even the outs he made looked pretty good.

Speaking of looking good, Lucas Duda hit his first home run of the year in the fourth inning. Like Wright’s, his was a solo home run. He hit another one in the seventh inning, a line drive that got out of the park about as quickly as it physically could. Duda’s certainly not going to maintain the 162 home run pace, but Mets fans will probably get to enjoy many more white russians over the remaining 160 games.

The only two runs Dickey allowed in his six-inning outing came in the fifth inning. He issued a two-out walk to Michael Bourn, and Martin Prado followed it up with a hard line drive that cleared the wall in the left field corner. With four walks and three strikeouts in total, Dickey’s control was not at its best, but he was able to keep the damage to a relative minimum. One game, of course, is not a cause for concern with Dickey’s walk rate. By the end of the year, he’ll probably have a mind-blowing walk rate considering he throws a knuckleball the grand majority of the time.

Josh Thole’s two-out single in the bottom of the fifth inning put the Mets back in front of the Braves for good. Thole went 2-for-4 today, and so did Kirk Niuewenhuis, who made his major league debut.

With a one-run lead in the seventh inning, Bobby Parnell retired all three batters he faced, one of which was via strikeout. Duda’s second home run gave the Mets twice the breathing room for the final two innings of the game, and Jon Rauch threw a one-two-three inning with a strikeout like Parnell in the eighth. Frank Francisco allowed a couple of hits - one to begin the ninth and another with two outs - but struck out Matt Diaz to end the game.

Two games into the season, the Mets have taken a series from the Braves, and tomorrow they’ll have the opportunity to win their first three games with Jon Niese on the mound. It won’t be an easy task with Mike Minor on the hill for the Braves, but a sweep would sure be a good way to begin the year after a long winter of doom and gloom. 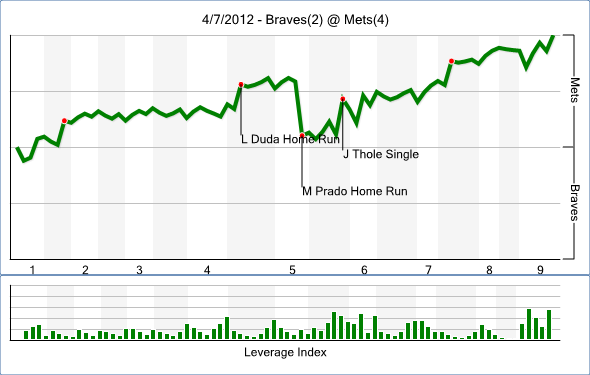