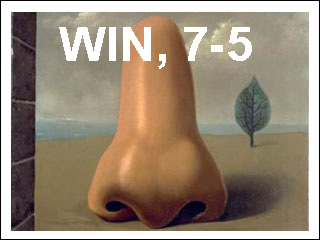 Jon Niese was greater than the sum of his parts today.

Look at the final line -- six innings, seven strikeouts, four walks, three earned runs -- and you'd think it was a decent start against an offense in the midst of having some trouble. But the start represented so much more for Niese and the Mets.

For one, he had a no-hitter going through six innings. That was enough to percolate interest in the game, and it also does more to describe how good he was. He got 10% swinging strikes on his fastball, mostly from high strikes on 92-93 MPH four-seamers. That velocity was strong, and he hit 92+ on his 96th pitch, so he kept the gun happy all game. The curveball and cutter only produced two swinging strikes in 43 pitches, but they did help Niese keep the ball on the ground. He had ten ground balls to two fly balls, so even if those pitches weren't producing whiffs, they were producing.

Niese even broke out a new release point on lefties. The lefty dropped to a Mike Myers / Randy Myers release point to get a few strikes on left-handed batters. He might have tried it one time too many, as he stumbled and fell on a sidearm pitch late in the game. Take a look at his release points and you'll see the pitch pretty clearly, thanks to Brooks Baseball: 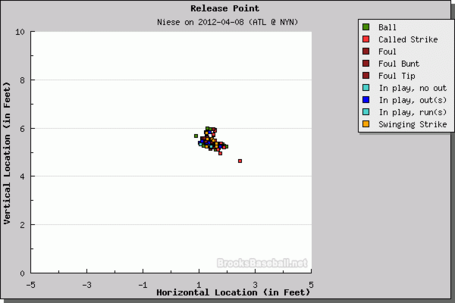 In a way, that pitch was a microcosm of today's game. It was almost disastrous, and in any other year, the Mets could have lost this game and two or three players to the DL along the way. Niese had hamstring surgery once, after all, and when he fell off the mound, many Mets fans found their breath caught in their throats. But Niese stood back up and shook off any attention.

In the seventh, Lucas Duda misplayed a ball that helped turn a single and a walk into three runs, but Manny Acosta shut the door and didn't let the inning turn into a disasterpiece theater. In the eighth, Lucas Duda and Kirk Nieuwenhuis ran into each other in the outfield -- but Duda caught the ball and nobody was hurt. Later, Ronny Cedeno and Ruben Tejada ran into each other on a pop fly. Once again, nobody was hurt and the out was secured.

What could have been terrible turned out triumphant.

On to the other side of the ball. You'll see in the box score that David Wright went one for one with a single, but his offensive production ranged far beyond that simple line. He had a sacrifice fly, a walk, and an intentional walk, and seemed to be in a good frame of mind at the plate. Jason Bay, despite a baserunning gaffe, did give the Mets a run-scoring single and a walk. Daniel Murphy had two doubles and extended every rally.

But the hitter's game ball goes to Ruben Tejada. In his second game in the leadoff spot, he showed patience, got into good counts, and collected his first four-hit game of the season. He even showed power with two doubles, one of which could be described as 'booming.' He started the game off with a double in the first (Wright plated him), and in the bottom of the sixth, his double plated the team's sixth and seventh runs in the form of Bay (after his walk) and Duda (after his single).

Though the game got a little closer than it perhaps should have, the Mets won a good one on Easter Sunday. Their young lefty pitcher looked good, their young shortstop had a multi-hit game, and their young right fielder got a walk and a single despite staring down the wrong side of a platoon advantage for most of the game.

That's all important, because it will only be because of the youth if the Mets rise once again.

Nice job by KeithsMoustache; that effort in the game thread embiggens us all.