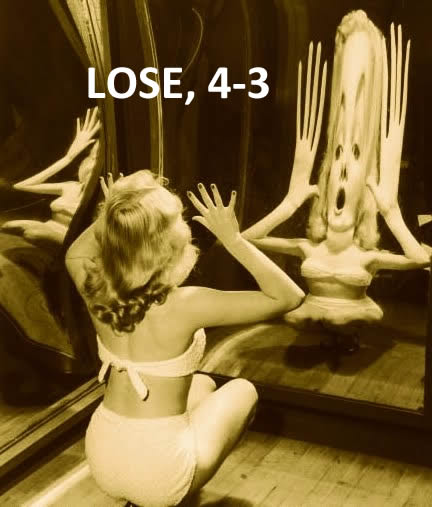 This game began as art and ended as farce. So goes most of life.

The art came from the starting pitchers, who were both, as the kids say, dealing in the early going. Bud Norris was sharp through the first six innings, fanning seven, keeping the ball squarely on the infield, and wasting little time or pitches dispatching the Mets' hitters. He scattered three hits and hit a batter, but all other Mets went quietly. David Wright continued his traditional futility against Norris by striking out in his first two at bats, putting his record at 0 for 10 against the young righty to that point. The first whisper of a threat came when Kirk Niewenhuis laced a hard hit single into right to lead things off in the top of the sixth, but was promptly picked off first (on a play where the umpire initially called him safe, his flip flop infuriating Kirk, though it was ultimately the right call).

R.A. Dickey was not as overpowering, of course, but ultimately just as effective and efficient. The knuckleballer walked a pair in the bottom of the second inning, and saw Josh Thole flub a bouncer in front of the plate in the third, but he too kept the batters at bay. Like Norris, he did so without allowing too many fly balls, and struck out six Astros over the first five frames. Even accounting for Houston's mystery lineup--a veritable Who's That--this was an impressive performance, for a time.

Dickey ended the no-no speculation by ceding a leadoff single to Jordan Schafer to start off the bottom of the sixth. After a sac bunt, Jed Lowrie found no-man's land with a bloop to shallow left, and Schafer scored shortly thereafter on a fielder's choice. Matt Downs then connected on a rather flat offering from Dickey and parked it in the Crawford Boxes for a two-run homer.

This is around the time when the game transformed from a taut pitcher's duel to a head-scratching slog.

The Mets responded in the top of the seventh with two singles by Wright and Ike Davis to start things off. Both advanced on a long fly ball by Mike Baxter, then Wright came in to score when Downs flubbed a grounder from Andres Torres (curiously ruled a hit). After Josh Thole tapped a ball right in front of the plate, too shallow for Davis to race home (Keith Hernandez noted Ike's "truck horse" speed), Norris walked pinch hitter Lucas Duda. Though Norris was clearly fading and there were two pitchers warming up in the bullpen, Houston manager Brad Mills stuck with his starter against Nieuwenhuis. Kirk laced a single between first and second to drive in two and tie the game at 3.

The Astros attempted to make up for leaving Norris in too long by using a different reliever to face the next five Mets batters who came up after his exit. But other than a two-out Davis single in the top of the eighth, each pitcher retired their respective hitters, so I guess it worked? Other than completely depleting the Houston bullpen, of course, though that proved to be of no consequence.

Manny Acosta initially had a good recovery from his awful night in Denver, setting down the Astros in order in the bottom of the seventh. But in the eighth, Schafer (him again) tapped a ball up the third base line that he easily beat out for an infield hit. Jose Altuve fouled out attempting to bunt him over, but Schafer took matters into his own hands by stealing second, than came around to score on a single up the middle by Jed Lowrie,

Against all odds, Terry Collins managed to out-stupid Brad Mills in the bullpen management department by sticking with Manny Acosta in a big spot. He used Tim Byrdak and Bobby Parnell to get the last two outs in the eighth, but the damage was long since done. The Mets' batters went quietly in the ninth against Enormous Piece of Human Garbage Brett Myers, and that's all she wrote.

Twas a thing of beauty once, this game. But nothing can last forever. Not even Manny Acosta's appearance in a game, though it may seem like it. 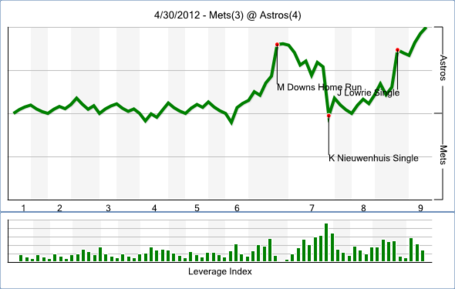 Nice job by BurleighGrimes; his effort in the game thread embiggens us all.