Jason Bay Confounds -- And Always Has

Share All sharing options for: Jason Bay Confounds -- And Always Has

When a player that was once a beast turns into his least for so long it's only natural that the boo-birds come out to see him play. Here's a player being paid handsomely to drive in runs for your home town team, and he's not coming through.

So it make sense that some Mets fans hate Jason Bay. But not all, at least not yet. Isn't there a sense that Bay desperately wants to produce better, and that he's trying hard? Isn't there a bit of sympathy for a seeming everyman? It's not his fault Omar Minaya gave him all that money. There's also no need to get all emotional about a baseball player that is actually good at what he does in the grander scheme of things, and is also a nightly performer on the small screen. It's better to save that hatred for real people that have a real effect on real life issues.

But it does make sense to be confounded by him. Was all of this decline so obvious? We saw some things ahead of time, but this much decline, this quickly? What happened? What's happening now? He is now, and has always been, a confusing player.

He was an enigma from the first. Traded three times before he gave up his rookie eligibility, he had two organizations give up on him without seeing a Major League debut. First, the Expos gave him up for a washed-up (never-was) Lou Collier. At that point, Bay had shown power and speed in the low Minors but had struggled in a small sample upon his promotion to High-A (145 PAs of .195/.306/.268 ball).

Of course, the punchline is that it was the Mets that wrested control of a cheap Jason Bay from Les Expos all those years ago. The team should have banked him then but only held on to him for 433 PAs and sent him to the Padres for Steve Reed and Jason Middlebrook. The 37-year-old Reed did pitch well for the Mets, and Bay's Double-A ISO was 'only' .187 -- perhaps they thought he was going to be a tweener OF. Not enough power for the corners, not enough glove for center.

It would be easier to be angry at that Mets front office had the Padres not gone and traded Bay away a year later, after he hit .303/.410/.541 with 20 home runs and 23 stolen bases and 71 strikeouts against 55 walks in 373 Triple-A plate appearances. Then again, Bay was 24, and in the PCL that year. Maybe it was just one of those things that happens to an okay player in a good situation in his prime. And they were getting Brian Giles, who at the time was a season removed from hitting 38 home runs. He was a sure thing.

The Padres had to send Oliver Perez to the Pirates as well. That's probably because the highest ranking Bay ever got from Baseball America was #74. He was never a top prospect. He did pretty well for a 22nd-round non-prospect.

He turned into a power hitter with speed in Pittsburgh, hitting 136 home runs and stealing 47 bases with an average over .280 over his tenure in the yellow and black. He had patience and didn't seem to strike out too much, so the .247 batting average in 2007 was laughed off as a blip. Sure, he had a .292 BABIP that year, but he'd be sustaining high BABIPs all along -- he was probably just a line-drive hitter with speed, or so the theory might have held.

Even at the height of his career, there was this asterisk, and perhaps more. In 2005, he was invited to the home run derby as the first Pirate to do so since Barry Bonds in 1990, and the first to represent Canada in a country-vs.-country format... and didn't hit a single home run. Watching that derby, many viewers felt badly for the player. The announcers talked about how he was a line-drive kind of guy. Since it came right after Bobby Abreu set the then-record, many forgot it even happened. This wasn't a mark on his playing career, but along with his poor 2007 (.247 average, 21 home runs), it did raise eyebrows.

Obviously, neither was an impediment for the Red Sox, who sent Craig Hansen and Brandon Moss to the Pirates (and Manny Ramirez to the Dodgers, with the Pirates also getting Bryan Morris and Andy LaRoche) to get Bay in 2008. But the return was deemed light by many looking at it. John Sickels had Morris as the teams' fourth-best prospect going into 2009, and LaRoche was a decent buy-low at the time, but there wasn't a top prospect in the bunch. This was supposedly a sought-after slugger, and a right-handed might-be-a-reliever coming-off-Tommy-John was one of the best pieces coming back to the Pirates.

Bay's time in Boston was, at the very least, superficially enticing. He hit 45 home runs and drove in 142 RBI(z) in 849 PAs. He kicked his walk rate into high gear, and was a sought-after free agent. The rumor was that the Red Sox were willing to pay $15 per year for four years. So was it that terrible that the Mets paid four years and just under $62 million for his services? Was it that option year that Mets fans dread so much that made the deal bad? Or just his new home digs? Or the fact that he turned 32 right before he signed that contract?

Well, some derided the the original rumor, so yes, maybe that option year and the extra dollars were a bad idea. His defense was denigrated, his slowly-rising strikeout rate was pointed to, and his age trumpeted. On the now-defunct (old version of) God Bless Buckner, I overlaid his 2009 Fenway hits on top of a Citi Field map. The following infographic did not seem to bode well for the deal. Look at all those blue Fenway home runs that disappeared in the virtual Citi in Bay's future (now present). 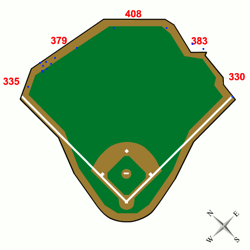 Then again, even I had to admit that this sort of thing was an inexact science, and that the Green Monster walls were high and close -- so maybe those left-field home runs would be home runs in Citi. Hard to know. And even if I didn't like the number of years or the dollar signs on the deal, in my heart of hearts I figured he'd be a boon at the plate.

Many agreed -- like Jack Moore of FanGraphs, who said that though the Mets overpaid, the offense would benefit, or Mets Grrl, who was a little ambivalent about the signing, and Greg Prince, who pointed out he was "not a franchise player" but he wasn't in his early forties yet either. Maybe none of the analysts were more prescient than Brian Costa at the Star Ledger -- "Bay’s health and production could deteriorate with age, making him an albatross.” Him, or Jeff Passan, who thought the Mets should have spent that money on John Lackey. One of those guys.

It's hard to say exactly what happened when Bay joined the Mets. If you look at the peripherals, it almost looks like one bad year changed his whole approach and sunk his battleship. 2010 was an incomplete year, but his batted ball mix was the same as he'd ever shown. That year, he had a .79 ground-ball-to-fly-ball ratio. His career number was .86. As in 2007, the major power-sapping culprit was his home-run-per-fly-ball ratio. That number was 11.4% in 2007, and between 2004 and 2009, was otherwise over 15%. His first year in New York, it fell to 5.1%.

But power takes the longest to stabilize. Isolated slugging percentage does not reliably predict itself until about 500 plate appearances into a season. And Bay only managed 401 plate appearances in 2010. Maybe a healthier season would have seen some extra power.

There was some talk that Citi Field got into David Wright's head once. What if it got into Jason Bay's head? He's never hit more ground balls than fly balls in his career -- other than in 2011 and 2012. His HR/FB ratio has recovered, slightly, and was doing well in this early season, but he's still hitting too many ground balls for a 'slugger.'

Or maybe it was just age. My work with Jeff Zimmerman on FanGraphs seems to suggest that power peaks even earlier than we first imagined. Maybe this was all the work of age.

If you look at his approach at the plate, not much as changed on his fly balls, line drive, and home runs -- he's pulling about the same, but the balls just aren't going as far. That would be a powerful argument that age has just sapped some of his home run power. Check his batted ball angle (left) and distance (right) from baseballheatmaps: 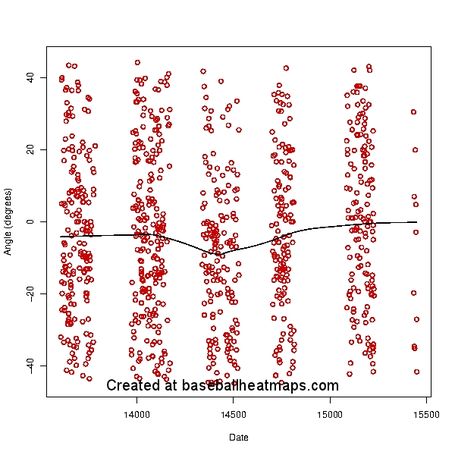 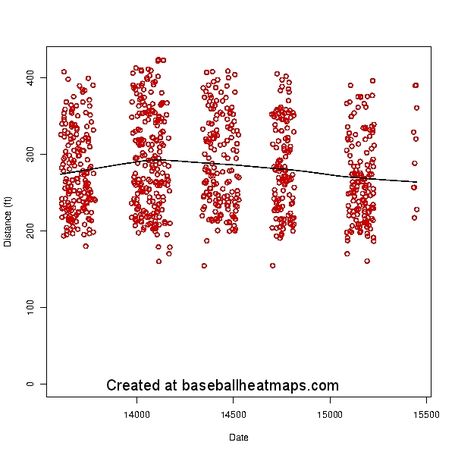 At this point in his career, Jason Bay has suffered as many indignities as he enjoyed heights. Almost literally -- he's had five really good years and four really bad years.

In 2005, Bay was selected to his first All-Star Game as a reserve outfielder. He was the only player on either roster not to appear in the game -- WikiPedia entry on Jason Bay

To his credit, he's been a gentleman throughout. When he failed to hit a home run in that 2005 derby, he laughed it off and pointed out that it absolutely wasn't nerves. Still, that wasn't what he might have picked for his first All-Star appearance. When he got a standing ovation the following year as an All-Star in PNC Park, he was genuinely touched and Pirates fan (and writer) Pat Lackey said that it was "obvious how much the moment meant to him." Pearl Jam told people to vote him into that All-Star game. He hit a single in three at-bats.

He never made a fuss when he was traded, or when his contract was discussed. Google "Jason Bay Complains" and you get hits for him not complaining about something. His mellow personality, born in a small hamlet in Canada, covered up his excellent years in a way -- he's no star, he doesn't act like one -- but it may also help fans root for him now, as he struggles.

Jason Bay contains multitudes. He's overcome some long odds and had some great years, and he's been the same steady dude throughout. Miscast as a superstar, he doesn't fit the bust or flameout labels either -- he tries too hard for that. Mets fans may grumble that none of his great years came with their team, but that might just be the fault of the long, slow slog of age. That's a reaper that comes for all of us.