Share All sharing options for: Is Dillon Gee A Better Pitcher Now?

Coming into the season, my expectations for Dillon Gee were low. In my player profile of Gee on January 30, I wrote:

"In a perfect world, Gee would begin the season in Buffalo and provide depth for the rotation, but the Mets just don’t have very much starting pitching right now. As a result, Gee should get another full-season opportunity to prove his doubters wrong by showing some improvement."

Six starts into the season, it looks like Gee could prove this doubter wrong. At this stage of the season, everything is a small sample, but Gee is looking better than he did with the Mets between 2010 and 2011. While his 4.78 ERA won’t turn heads, Gee’s 3.37 FIP and 3.00 xFIP are marked improvements over his previous performance. Through May 9, his xFIP ranked twelfth among National League starting pitchers.

Gee’s improvement is, of course, the result of better strikeout and walk rates. Walks inevitably come back to haunt pitchers, and Gee’s current rate is less than half of what it was prior to the beginning of the season. For the grand majority of his minor league career, Gee was very stingy with walks, which means this display of good control didn’t come completely out of nowhere.

Gee’s strikeout rate was mediocre prior to this year, but it has improved in the early going, too. There’s at least a decent chance that his current rate will stick. Gee racked up strikeouts in his last full season with Buffalo in 2010, and he is now generating more swinging strikes than he did between 2010 and 2011.

In addition to the strikeout and walk improvements, Gee’s gotten the short end of the stick on both home runs and balls in play. His .347 BABIP is the fifth-highest among National League starters, and his career number prior to this year was .262. Even though the Mets are not a defensively-gifted team, Gee’s BABIP should come down quite a bit.

As for home runs, there has been a significant jump in the percentage of fly balls against Gee that have cleared the fences.

All four of the home runs he’s allowed have been hit in his three starts Citi Field, but his three road starts came in Atlanta, Colorado, and Philadelphia, two of which are not exactly Petco Park when it comes to home run suppression. Citi Field’s new fences can only hurt pitchers when it comes to home run rates, but Gee’s is still so high that it should come down over time.

In short, Dillon Gee might be better than I thought he could be. He’s still just a 26-year-old pitcher, and his performance in his first half-dozen starts this year is better than any stretch he had with the Mets before. Everything could revert back to his mediocre numbers from last year, but right now it looks like he’s an improved pitcher.

Completely random conclusion: Does anyone else think Gee looks a whole lot like Tim Redding these days? 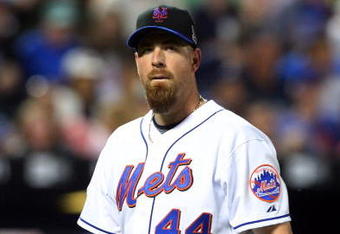