This Date In Mets History: May 14 — Willie Mays Homers In First Game With Mets

Share All sharing options for: This Date In Mets History: May 14 — Willie Mays Homers In First Game With Mets

On May 14, 1972, Willie Mays, playing his first game with the Mets, hit a go-ahead (and eventual game-winning) solo home run to lead off the fifth inning. It was his first hit with the Mets and it gave his new team a 5-4 lead over — you guessed it — his old team, the Giants. 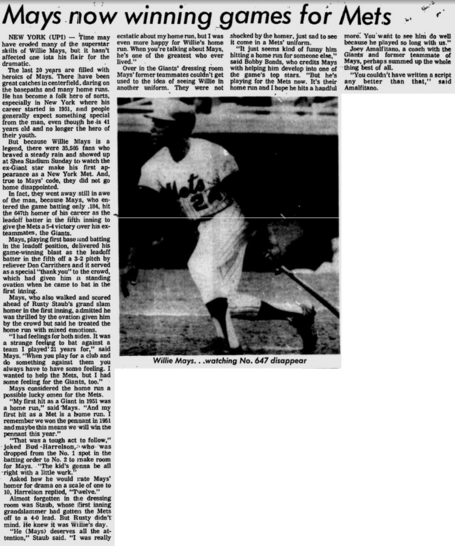 While not yet related to the Mets, anyone who has followed this team since at least the late nineties will have a sense of where this one is going. On May 14, 1998, the Florida Marlins sent future Met Gary Sheffield, former (and future) Met Bobby Bonilla, Charles Johnson, Jim Eisenreich, and Manuel Barrios to the Los Angeles Dodgers for future Mets Mike Piazza and Todd Zeile. Eight days later, Piazza would be on the move again.

On May 14, 2000, Mike Hampton tossed a complete game in beating the Marlins, 5-1. Mike Piazza hit a grand slam off Brad Penny in the sixth inning to give Hampton all the run support he would need. Derek Bell went 1-for-3 to raise his OPS to .984. Hampton went 1-for-3 at the plate and finished the day with a .571 OPS, just seven points lower than shortstop Kurt Abbott.