All Squeezes Great and Small: Batista and Frank Frank Fail to Implode in Mets Win

Share All sharing options for: All Squeezes Great and Small: Batista and Frank Frank Fail to Implode in Mets Win 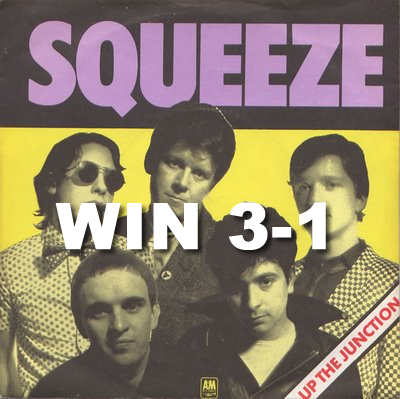 Miguel Batista hasn't made many starts this year, even if it feels like it, and even if I feel like I've had to recap all of them. Watching him is a nerve-wracking experience, because every single pitch he throws looks like it could be destroyed, Giancarlo Stanton-style. But as they say, sometimes it's better to be lucky than good. Or, barring that, to play someone whose own bad luck trumps yours. That's what the Mets enjoyed tonight: a game in which they only logged three hits and saw their closer come dangerously close to his third meltdown in three days, only to have the Brewers' bad mojo take all.

Though the Mets have relished in playing from behind this season--and particularly during their recent road trip to Philly and Miami--they dared score first in tonight's game. Yovani Gallardo issued walks to Kirk Nieuwenhuis and Lucas Duda in the bottom of the first, which allowed Daniel Murphy to drive in the game's first run with a single.

The Mets nearly gave the lead right back, thanks to some inadvisedly adventurous fielding from Mr. Duda, who dove for a Taylor Green fly ball. Duda's unwise move allowed Green to get all the way to third with no out. After Brooks Conrad struck out, the Brewers did Batista a huge favor by attempting a safety squeeze that went about as well as you might expect. Conrad was tagged out in a rundown, and Batista somehow escaped the inning unscathed.

The patient batting we've seen so far this year form the Mets was in full effect, accentuated by Gallardo's wildness. Coming into this game, he'd averaged 4 walks per 9 innings, but he issued 6 free passes just in the first five innings. However, the Mets couldn't do anything with a Mike Nickeas walk in the second, and were similarly thwarted after one-out walks of David Wright and Duda in the third. After a 1-2-3 fourth inning, Gallardo walked Andres Torres to start the fifth, but retired the next three easily. It took him 99 pitches to reach this point, but it also cost him only one run.

After the near miss in the second, Batista chugged along, somehow retiring Milwaukee in order in the third and fourth, then working around a one-out walk in the fifth. Aramis Ramirez reached him for a two-out double in the sixth (the first extra base hit for either team), but Batista froze Corey Hart on a called strike three to skirt danger. No, I'm not sure how it happened either.

Gallardo held the Mets out of the hit column until the sixth, when Murphy belted a leadoff double beyond Nyjer Morgan's reach. Ike Davis followed with a fly ball deep enough for Murph to tag and advance. Seeing the Brewers' failed squeeze play must have given Terry Collins ideas, because he tried the same thing with Murph on third and Ronny Cedeno at the plate. Unlike the Brewers, though, the Mets were able to execute and expand their lead to 2-0.

Batista set down the Brewers in order in the top of seventh to cap a laudable effort. He was certainly helped out by some impatient at-bats, timely defense, and just plain luck. But--and this is important--he was not anywhere near as terrible tonight as I feared. So kudos, Miguel, for your non-terribleness.

Tim Byrdak and Bobby Parnell combined to set down the Brewers 1-2-3 in the eighth, with some help from a great play by Wright on Nori Aoki's attempt at a slap hit. Wright then led off the bottom half with a double in the corner against ol' pal Frankie Rodriguez. He moved to third on a Duda grounder, then broke for home on a Murphy grounder to first. Wright found himself caught in a rundown and surely would have been out were it not for the casual fielding of Aramis Ramirez. The third baseman took a rather casual approach to a throw from catcher Jonathan Lucroy and simply dropped it, allowing Wright to dash home with the Mets' third run.

With that run in the Mets' pocket and no more, that made it a save opportunity in the ninth inning. When you have a save opportunity in the ninth inning, you give the ball to your closer, as has been proven by both science and the holy work of St. LaRussa. There is absolutely no way you can not give the ball to the person who has been anointed Closer by the edict of God and Man.

Unfortunately for the Mets, their closer remains Frank Francisco, at least for moment. Frank Frank had a rough weekend in Miami. Not "went out for Cuban food at 3am" bad, but only one rung up on that ladder. He had very little rope with the fans in the crowd, the folks viewing at home, and his manager. When he got Ryan Braun in an 0-2 hole, only to lose him to a single up the middle, the boos immediately rained down on him. But I'm a proven closer! he surely thought to himself. Why, it's enough to make a man throw a folding chair into the stands.

Braun stole second and, after a groundout, came around to score on a Corey Hart single. To prove he could get out of a jam even worse than this, Francisco walked Taylor Green and put the tying run on base. That brought up Brooks Conrad, one of the interchangeable NL East hangers-on who seems to surface every now and then to do damage against no team but the Mets. Though the bases were not loaded, surely he'd find some way of hitting a grand slam.

Instead, Conrad struck out. Pinch hitter George Kottaras gave a Francisco offering a ride, but Duda didn't leap for this one. It settled in his glove for the last out.

Only a special pitcher can do that. I'm so glad we have an official Closer, guys. Imagine what the ninth inning would be like without it! 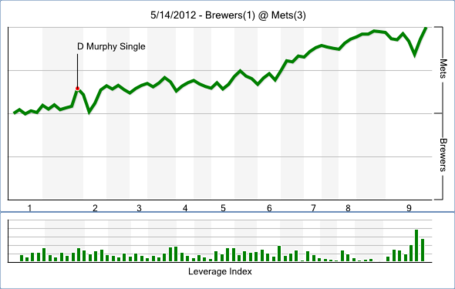