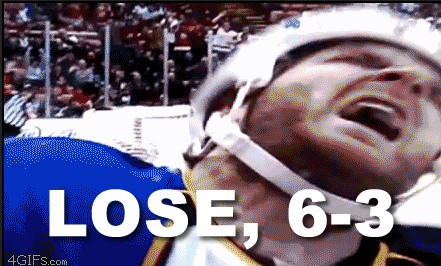 For most of the evening, this looked like it would be a tidy, scrappy win, the kind the Mets have specialized in all year. And then the bullpen got involved. Ah yes, the bullpen. There it sits. The Mets are obviously just one of many teams trying to figure out their relief situation and dealing with a disappointing (at best) bullpen. But here's the thing: I don't really care about those other teams and so their struggles don't concern me!

Johan Santana looked sharp early on, with his changeup particularly nasty. A one-out hit in the first was erased on a double grounder from Joey Votto, and he retired the Reds in order in the second. He nearly did the same in the third, but his opposite number, Mike Leake (one of the better hitting pitchers in baseball) took him up the middle for a single. Santana then allowed a long double off the wall to Zack Cozart. Leake was able to score all the way from first, just ahead of the relay throwm then took a header onto the CitiField turf. Not pretty, but it did give Cincinnati a one-run lead.

Leake foiled the Mets in the first inning, when three singles went for nought, and worked around a one-out Justin Turner hit in the second, but could not hang onto his thin lead in the bottom of the third. Mike Baxter hit a one-out single and stole second, prompting the Reds to give Wright nothing in the strike zone. Duda thwarted their plan with a single up the middle to score Baxter, tying the game at 1.

Santana's effectiveness appeared to fade for the remainder of the game, but for the most part he was able to dance between the raindrops. He walked a pair in the fourth and allowed a single in the fifth, to no ill effect, then set down the Reds 1-2-3 in the sixth. Leake, meanwhile, retired the Mets in order in the fourth and fifth and looked to be dealing before a too-human bottom of the sixth. Duda hit a leadoff single, then Murphy hit a scorcher down the first base line. Joey Votto made an amazing play to grab it, but he then made the poor decision to throw to second as he fell to the ground.

His throwing error allowed Murphy to reach safely and Duda to go all the way to third, which further allowed Ike Davis to double past Votto and put the Mets ahead. One out later, Mike Nickeas executed the second successful suicide squeeze the Mets have attempted in the last three game. BUNTZ, ladies and gentlemen, expanded the Mets' lead to 3-1.

I assume this squeeze stemmed from Terry Collins' desire to leave Santana in the game, since the pitcher's spot in the batting order followed Nickeas. However, it soon became apparent that maybe the Mets should have tried for a bigger inning. After getting the first out in the top of the seventh, Santana allowed an opposite field home run to Jersey's own Todd Frazier, then a single to Devin Mesoraco. A sac bunt put the tying run in scoring position, at which point Santana gave way to Bobby Parnell, who fanned Zack Cozart to end the inning.

After a quiet bottom of the seventh for the Mets, the Reds got way too loud. Rather than keep Parnell in the game, Collins turned, for some reason, to Jon Rauch, who let the lead evaporate in the blink of an eye. Three straight hits to start the top of the eighth--a single by Drew Stubbs, a double by Votto, and a single by Brandon Phillips--tied the game and put the go-ahead run on third. After a pop-out, Rauch was lifted for Tim Byrdak to face lefty batter Jay Bruce, who lifted a ball to deep right field for an RBI sac fly. Byrdak then gave way to old-school practitioner DJ Carrasco, who gave up an old-school first-pitch homerun to dead center off the bat of Frazier. No one receive retribution tonight, unless you count the Mets fans who felt plunked in the gut.

It's hard to tell whether the Mets' lineup felt demoralized by another bullpen meltdown or if the Reds' own bullpen is just that good. (It is statistically the best in the NL, at least according to Gary Cohen.) In either case, Mets batters put up little resistance in the eighth and ninth, capping a deflating evening in Flushing.

The Mets will have to shake this one off quickly, since there's a matinee tomorrow. Get some shuteye so you can get up bright and early, boys. Although if DJ Carrasco felt like sleeping in, I wouldn't mind. And at this point, I'd say much the same for the rest of the bullpen; save maybe Parnell, who Collins has shown zero confidence in, for reason I cannot fathom. The rest of you, may you sleep well, your dreams unencumbered by the specter of BUNTZ! 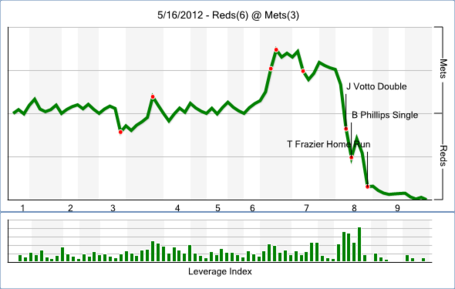