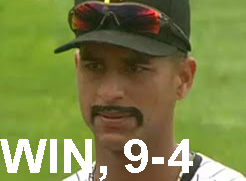 it's true that secondary players are secondary players for a reason. For much of the evening, Mets fans were treated with the pleasure of watching Mike Nickeas struggle with R.A. Dickey's knuckler. Two passed balls at key moments led to runs. And then he struck out swinging to end two scoreless innings early in the game. By the time Ronny Cedeno went out on his own to lay down a bunt with Daniel Murphy at third base with one out in a scoreless ballgame, there were probably a good number of Mets fans pining for Josh Thole and Ruben Tejada.

Mat Latos was pitching well. He didn't quite have his good velocity, but his breaking stuff was snapping and he was around the plate. Through five innings, he had seven strikeouts and had only given up two runs on Lucas Duda's fifth inning double. With the specter of Aroldis Chapman and Sean Marshall coming for the Reds (and Mets relievers pitching for the Mets), there were probably more than a few fans groaning about missed chances.

In the bottom of the sixth, the Mets were down two runs and Mat Latos just needed to get through the inning to pass the ball on. He gave up a walk to Ike Davis, and then Ronny Cedeno singled to shallow left. Then Mike Nickeas was asked to bunt. It looked like he might not manage it -- he bunted a couple strikes foul and the count ran to 3-2 -- but then he rolled a perfect ball down the line that third baseman Todd Frazier couldn't handle. With the bases loaded and no outs, the fact that they only got one run there might not have been impressive, but it was the bottom of the lineup.

In the seventh inning, Chapman and his impressive stuff came on to shut out the Mets for multiple innings, or so the storyline was supposed to go. Chapman had his usual knockout stuff with iffy control, and Wright took advantage like a veteran leader should, working a walk. Lucas Duda took the one bad pitch from Chapman -- a bit of a hanging, if mid-nineties, slider -- and muscled it into shallow center. Daniel Murphy hit a fliner liner that looked like it might be caught by the center fielder but ended up bouncing out of Drew Stubbs' glove. For the second time in two innings, the Mets had the bases loaded with no outs. Once again they scored a single run, but it was Aroldis Chapman.

In the eighth inning, Rob Johnson replicated Mike Nickeas' bunt and reached base to get on in front of Wright. Wright boomed one to center, and Johnson scored to move the Mets ahead. Murphy was walked to get to Cedeno, who had two home runs in 454 plate appearances in 2011. Ronny Cedeno then hit a massive three-run blast.

Mike Baxter hit a sacrifice fly to get the third run. Justin Turner hit the sac fly to get the tying run, and drove in the sixth run. Ronny Cedeno hit that three-run homer to put the game out of reach. It was a good day for role players.

Of course, David Wright walked three times and hit two doubles. He's still hitting .400 and he drove in a run on Thursday. Daniel Murphy had two hits and a walk, and went into the outfield in order to make two great catches in a way he wasn't supposed to be able to. He even doubled up Joey Votto at home plate on one of the catches. Lucas Duda had two hits. R.A. Dickey struck out eight in six innings and kept his quality start streak going. The stars had an impact on the game as well. But it was still a good day for the role players.

One last shout-out goes to the bullpen. Jon Rauch, Bobby Parnell and Frank Francisco pitched three scoreless innings with four baserunners and three strikeouts against one walk. Those sort of numbers are attainable for the important trio, but they haven't been in the box scores recently. Perhaps this one can get them going.

The role players turned this tight one into a laugher, and the bullpen kept it that way. Perfect for getaway day. 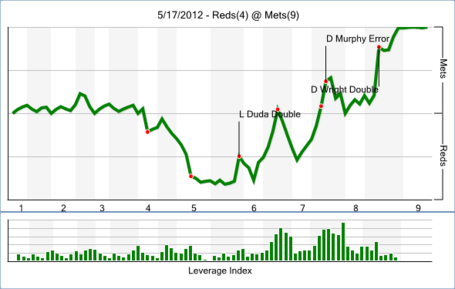