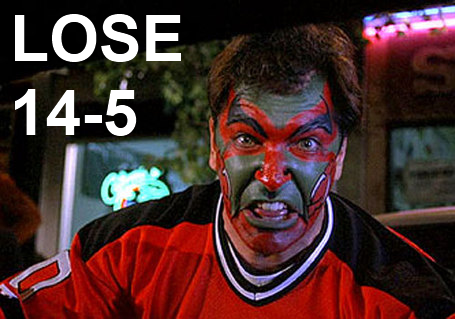 To say the Mets lost their first interleague game of the season in Toronto would be an understatement. The Blue Jays overpowered the Mets in the early going and cruised to win the series opener, 14-5.

There was a brief time in which it appeared that Jon Niese might be able to handle Toronto's powerful lineup. After he walked Kelly Johnson and allowed a single to Yunel Escobar, he sturck out the Jose Bautista and Edwin Encarnacion. Up stepped J.P. Arencibia, who belted a three-run home run with two outs. It was all downhill from there.

Niese went on to serve up three more home runs, and in just three innings of work, he allowed eight runs to score. While he struck out six and walked two, Niese gave up a ton of hard contact in the game and saw his ERA balloon to 4.85 as a result.

The Mets' bullpen didn't make the game any better. Manny Acosta pitched two innings, walked and struck out four a piece, and allowed one home run and five runs. Ramon Ramirez allowed one run in the inning he pitched, too, and by the time he was done, the Mets were down 14-1.

At the plate, the Mets did not do much to help their beleaguered pitching staff. Back when the game was within reach, they put runners on second and third with nobody out in the second inning but managed to score just one run. They went scoreless until they plated four runs in the eighth inning. The highlight of the inning was Scott Hairston's opposite-field home run, a rarity in his career, but there wasn't much to get excited about since the team's odds of a comeback were so low at the time.

There were, however, a few enjoyable things about the game. Ron Darling turned into the crankiest incarnation of Keith Hernandez in the top of the eighth inning, turning off his filter and letting the audience know just how disgusted he was with the game taking place in front of him. We understand, Ronnie.

In the bottom of the eighth, backup catcher Rob Johnson took to the mound to give the Mets' bullpen one inning of rest, and he set the Blue Jays down in order on two pop outs and an inning-ending strikeout. His appearance was about as good as it gets when the team you're rooting for is down more than ten runs.

The Mets will attempt to even the three-game series with Toronto tomorrow at 1:07 pm. Miguel Batista gets the start for the Mets, and Brandon Morrow will pitch for the Blue Jays. 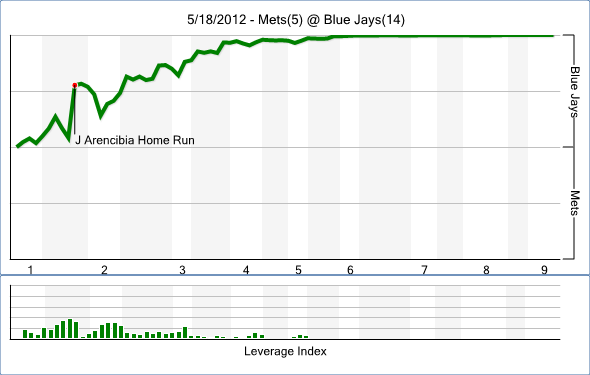