Mets Manage To Salvage Series Finale, Let's Get The Hell Out of Toronto

Share All sharing options for: Mets Manage To Salvage Series Finale, Let's Get The Hell Out of Toronto

Let's just get this out of the way: the Mets' first trip to Toronto since 2006 was not a boatload of fun. After getting rocked in game one on Friday night and getting shut out on Saturday, the Mets really needed a victory on Sunday. They got that victory but it wasn't without some heart-racing moments in the late innings, as the Mets held on to defeat the Blue Jays 6-5.

The Mets got off to a quick start in this one, as Andres Torres walked to lead things off and Mike Baxter hit a double on which he was thankfully not called out at second base. This set the table for the unstoppable David Wright, who doubled both Torres and Baxter in, putting the Mets up 2-0. Three batters later, Kirk Nieuwenhuis hit a bloop to center field on which Colby Rasmus made an excellent diving catch. Or so he thought, anyway. The ball was snow-coned and as he tried to gain full control, it rolled out of his glove onto the turf, giving Kirk a gift double and the Mets a free run. In the next inning, after a Ronny Cedeno single and a pair of groundouts, Mike Baxter stepped up to the plate and ripped an RBI triple, his second extra base hit in as many innings, to pin the Mets to a 4-0 lead.

Staked to an early lead for the first time this year, Dillon Gee was the starter for the Mets and he pitched decently enough in terms of results. Gee's control wasn't great, as he seemed to be in trouble most of the day. In the first inning, he put two batters on base before wriggling out of the jam. In the second, he walked a pair of batters before Yan Gomes singled to plate the Jays' first run. Jose Bautista ripped a solo home run in the third inning, cutting the Mets' lead to 4-2.

In the fifth inning, the Mets added two more runs on a Daniel Murphy RBI single and an Ike Davis bases loaded force out at second base, making it 6-2 in favor of the boys from Flushing.

Gee managed to settle down in the middle innings before running into some trouble in the seventh. After hitting Gomes with a pitch to lead off the inning, Jose Bautista singled him in to cut the lead to 6-3. At that point, Gee was removed in favor of Bobby Parnell, who got Edwin Encarnacion to hit into a fielder's choice on his second pitch to end the inning.

Ike Davis led off the eighth inning with a double, his only hit of the day, and moved to third base on a passed ball. The promising start to the inning was short-lived, as Davis was gunned down at the plate trying to score on a wild pitch. Making things worse, Ronny Cedeno went on to single to left field on the very next pitch. The Mets, in fact, managed to load up the bases later that inning with two outs for David Wright but after questionable strike two call, David went fishing for a low and outside slider for strike three.

Bobby Parnell stayed on for the eighth inning and things did not go all that well for Captain Fastball. The frame started off with back to back doubles, plating a quick run. After a Rajai Davis ground out, Colby Rasmus singled up the middle to plate the Blue Jays' 5th run, before Yan Gomes struck out swinging on a 101 MPH fastball from Parnell.

After an unfruitful ninth inning rally for the Mets, Frank Francisco came in to close things out up a run, against the heart of the Jays' order. Frank Francisco facing off against Jose Bautista does not instill much confidence in most people and things didn't look good after Yunel Escobar walked to lead off the inning and Bautista singled through the hole on the right side of the shifted infield. But somehow, Francisco managed to strike out Edwin Encarnacion, J.P. Arencibia and Eric Thames to seal up a 6-5 victory. It wasn't pretty but it's a win, at least.

The schedule looks to get a little easier for the Mets this week, as they head to Pittsburgh to take on the Pirates for three games. Johan Santana takes on Erik Bedard in Monday evening's 7:05 PM opener. 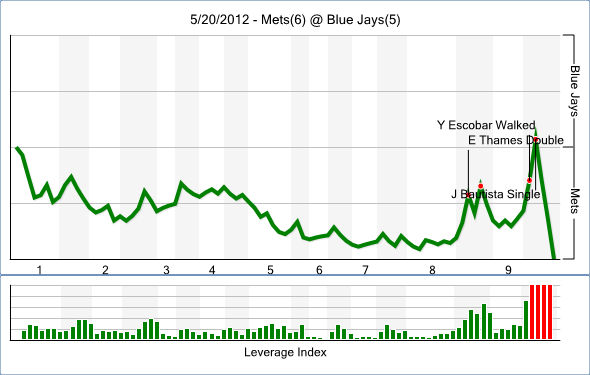