Share All sharing options for: Wanted: Your 1999-2000 Memorabilia and Photos 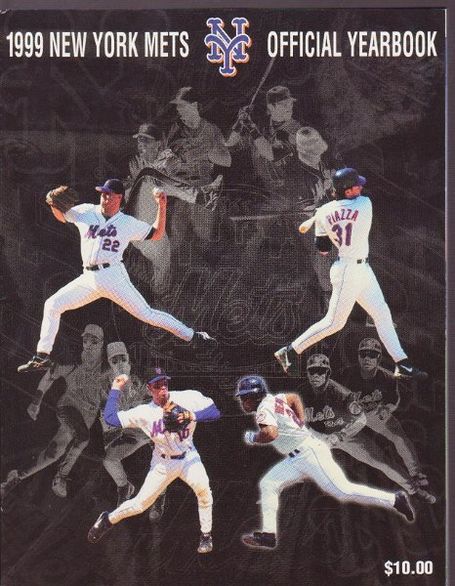 The folks at Amazin' Avenue have been kind enough to allow me a space for some self promotion. I was going to write "shameless self promotion," then I remembered that I am filled with a deep sense of shame at all times.

If you follow me on Twitter, you've no doubt seen me tweet about an enhanced ebook project I'm currently undertaking. The ebook is called Yells For Ourselves, and it concerns the 1999-2000 Mets, looking back on them much as I did for this site a few years ago. It will provide a retrospective of those seasons, but will do so primarily with an eye toward tracking the media's perceptions of these teams and how they evolved over time. If you're interested in reading a fuller expression of what this thing will be, you can get a sneak peek at the book's introduction here.

The ebook will have interactivity and enhancements designed primarily for the iPad, though I will also produce "no frills" versions for other ebook devices. The exact functionality and nature of these extras are being worked out as we speak; my goal is to have a sample of this thing up and running some time in June, with a Kickstarter initiative to follow shortly thereafter that I will definitely be bugging everyone about once it goes live.

But this is all a ways in the future. The main reason for this post is that sample preparation includes developing the overall design of the ebook. And that's where you come in. Yes, you.

See, while I have tons of video and audio from this period, I don't have a lot of Mets collectibles--specifically, scorebooks, yearbooks, stadium giveaways, pocket calendars, etc. My attempts to find such stuff through the usual internet channels haven't been too successful. I want to view these collectibles because I would like the book to aesthetically resemble the Mets--and Mets-related items--of that era. I realize that trying to emulate the late 1990s/early 2000s is, from a design standpoint, powerfully unhip, but I like a challenge and believe that I can do something interesting using these raw materials as inspiration. If you take a look at the ebook's official site, for instance, you may notice that the site's header is loosely based on the font/style used for the team's official slogan in 1999: ARE YOU READY?

Long story short, if you have official Mets items from 1999 and 2000, I would like to see them. You don't need to physically send them to me, and I'm not asking permission to use them in the book. I am merely seeking inspiration. All I need is for some helpful folks out there to snap pics of this stuff so I can look at them. For your trouble, I can offer you an official thanks in the book and a free copy in the format of your choice once it's available (as long as your favorite format is not "print," since this book will be digital only).

Another thing that I've found it hard to come by--at least without paying an arm and a leg--are game photos from these seasons. The big photo agencies have pics of the Mets from 1999-2000, but they didn't get to be the big photo agencies by charging reasonable rates for them. So if you have a photo of the 1999-2000 Mets, or Shea during this era that is yours and yours alone and would be willing to let me use it in this ebook, that'd be pretty awesome. I will pay you for their use, and you would be entitled to the official thanks and free copy outlined above.

As far as photos go, my big white whale at this moment is a shot of Shea from an upper deck perspective that shows the whole field, which I would like to use as the base for an interactive feature in the book. If anyone out there has that, you would be my hero.

If you can pitch in with inspiration or a photo for use, just send a pic to me in a Twitter at-reply. It's as simple as that. If you have something really awesome that you don't want to share in a public forum, DM me on Twitter or email me here and we'll figure something out.

Thanking you in advance for your contribution to the field of Edgardo Alfonzo Studies.