Share All sharing options for: Hef Digs Deep, Goes Deep as Mets Win Between the Raindrops 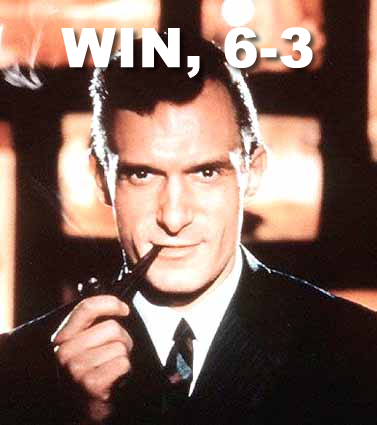 Before the season started, many people (myself included) had it up to here with Mike Pelfrey. (Pause to consider where your own level of "here" is.) Pelf pitched well beyond anyone's expectations in the initial weeks of this season, though, before succumbing to the ineluctable lure of Mr. Tommy John. His absence became even more pronounced when every pitcher who took his place was pretty awful. Since Pelf went down for the season, pitchers throwing in his absence are 0-27 with 97 walks and an ERA of 20 billion.* *(Stats may be inflated by faulty memory and rage.)

Jeremy Hefner looked to be another one of those hapless ersatz Pelfs during his first start, when a rain delay and general not-very-goodness turned a 1-0 Mets lead into an 11-5 debacle. Tonight started out as well as one might expect, allowing a leadoff double to Jimmy Rollins in the top of the first. Rollins moved to third on a sac bunt by Juan Pierre (a very 2012 Phillies play, one that did not meet the Keith Hernandez sniff test), then scored on a wild pitch.

The Mets responded immediately, thanks to a pair of odd plays in the field. Mike Baxter was hit by a pitch from Phillies starter Joe Blanton. Kirk Nieuwenhuis followed with a sinking line drive to center field that Shane Victorino might have been able to snag if he hadn't stumbled on his way in, a misplay that allowed the GKR booth another opportunity to display their baffling and undying love for the Flyin. Hawaiian. ("He really is the best, you guys.") Victorino's boo-boo put runners at the corners, after which David Wright brought in the first Mets run with a single that glanced off the glove of a leaping Rollins. Ike Davis picked a good time for his weekly hit, driving in Kirk and giving the Mets a brief 2-1 lead.

Hefner retired the first two batters in the top of the second, then surrendered a Pepsi Porch homer to feared slugger Brain Schneider. But Blanton continued the game of pitchers' HORSE by allowing a leadoff double to fresh-from-the-farm Omar Quintanilla, and, following a sac bunt from Hefner, an RBI double to Baxter that gave the Mets another lead.

Hefner settled in thereafter, setting the Phils down in order in the top of the third and ceding one harmless single in the fourth. Blanton mirrored him in the bottom of the third, and looked to do the same in the fourth when his plan was foiled by Hefner, of all people. The Philly pitcher offered a first-pitch meatball to his opposite number, obviously thinking Hefner was no threat with the bat. Hefner turned on the get-me-over fastball and planted it in the left field seats, not far from the Acela Club.

So Hefner's first major league hit was not only a home run, but a no doubter to boot. It was also the first homer from a Mets pitcher since Johan Santana went deep against the Reds back in 2010. It was also the first time a Mets pitcher has homered during his rookie year since Paul Wilson did it back in 1996. It was also, even when historically decontextualized, pretty awesome. As a certain radio announcer is fond of saying, "You just can't predict baseball, Suzyn."

You can, however, predict a regression to the mean. Hefner handled the Phils easily in the top of the fifth, but after the Mets bypassed a scoring opportunity in the bottom half (loading the bases with two outs but getting nothing), Hefner faltered. He walked Pierre to start off the sixth, then allowed a double down the left field line to Hunter Pence. Baxter misplayed the ball as it rolled under the outfield wall padding, which both allowed Pierre to score and Pence to go all the way to third with no outs.

It was around this time that the skies above CitiField began to look like Ghostbusters to the power of SURRENDER DOROTHY. So in the event that the Phils tied things up, there was every chance this official game could be unofficialized real quick. Hefner managed to knuckle down, though, by inducing a grounder to first that was too shallow for Pence to get any ideas of dashing home. He then fanned Victorino and got Placido Polanco to fly out to Baxter, somehow pinning that tying run at third.

The Mets then enlarged their lead to make an inevitable rainout seem much less death-cheating. Quintinilla started off the bottom of the sixth with another double. Terry Collins sent up Scott Hairston to bat in Hefner's place and looked like genius when Hairston belted a two-run blast to left (not far from where Hefner's shot landed). That gave the Mets two longballs from the #9 spot in the order. (See above in re: baseball, predictability in.) Hairston's tater sent Blanton to the showers and brought a visit from ol' friend Raul Valdes, who set the next three Mets down in order.

The Mets' lineup could do nothing against the other Phillies', but it ultimately mattered little. Bobby Parnell threw a drama-free 1-2-3 seventh inning, while Jon Rauch surrendered a leadoff single to Rollins in the top of the eighth just as the rains arrived, but nothing else. Shortly after Rauch et al jogged into the dugout, the heavens opened, forcing the long feared/awaited rain delay, which turned out to be far less formidable than the radar reports made it look. After an hour or so of thumb twiddling and a quick bottom of the eighth, Frank Francisco emerged to get the save, allowing a one-out Victorino single but nothing else. This gave Hefner his first major league win, which also makes him the first pitcher to get his first win and first homer in the same game. Baseball =/= predictable, guys!

So for one night, at least, the Pelf spot held its own. Tomorrow, a rubber match between Lee and Gee. Whee! 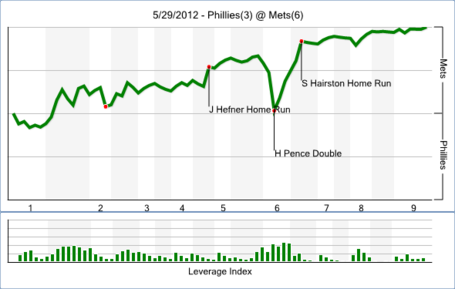