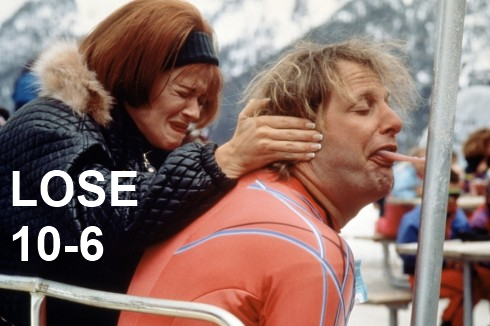 Believe it or not, the Mets appeared to be on their way to a rubber-game victory over the Phillies through six innings on Wednesday night. Before the bullpen took over and blew the game in painstaking fashion, Dillon Gee vs. Cliff Lee had gone about as well as any Mets fan could reasonably expect.

The Mets scored first in the bottom of the first. With one out, Daniel Murphy drew a walk, and David Wright doubled off the wall in center to bring him home. Ty Wigginton, who had an incredible series at the plate, hit a solo home run in the second to tie the game, but Gee didn't allow another run through the sixth.

With Lee still pitching in the bottom of the sixth, Scott Hairston hit a one-out double. One out later, Lucas Duda hit a long home run to put the Mets ahead 3-1. It was all downhill from there.

Gee retired the first two batters he faced in the seventh inning, but Brian Schneider doubled beyond the reach of Andres Torres, who was playing shallow on the play and looked bad in his attempt to track down the fly ball. With that, Terry Collins turned to the bullpen.

Bobby Parnell took the mound to face pinch hitter Carlos Ruiz, and he hung a curve that Ruiz clobbered for a game-tying home run. As for Parnell's successors on the mound, their performance is best summed up in box-score format.

If you missed it, I do not recommend going back to watch on MLB.tv or your DVR. Shane Victorino's sacrifice fly in the eighth and Jimmy Rollins's three-run home run in the ninth were the turning points of the game.

The Mets, for what it's worth, weren't able to score in the seventh or eighth innings, but they scored three runs in the ninth inning. With former Met Raul Valdes on the mound, Duda hit a solo home run, and Torres doubled in a run with one out. Charlie Manuel had seen enough and brought in Jonathan Papelbon, who allowed a single to Murphy to bring home Torres before getting Wright to ground out to end the game.

Had the Mets held on to win the game, the focus would have probably been on Gee, who had another very good start. In 6.2 innings, Gee had 5 K, 1 BB, and was charged with 2 earned runs. His weakness this year has been the home run, but his strikeout and walk rates suggest his 4.69 ERA should continue to improve.

The Mets are off tomorrow, but they will begin a three-game series against the St. Louis Cardinals on Friday night at 7:10 pm. It will be Carlos Beltran's first game back in Queens since the Mets traded him to the Giants for Zack Wheeler last summer. 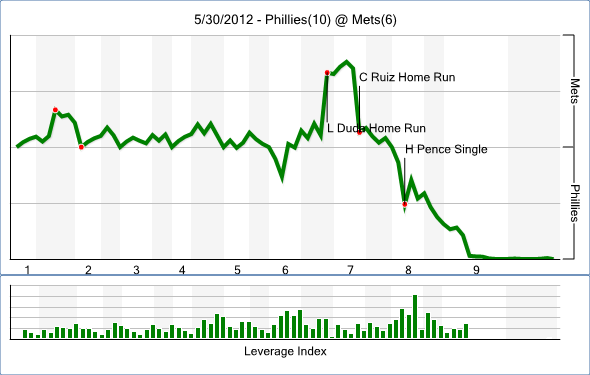