Share All sharing options for: A 25-Man Roster Of The Best Facial Hair In Mets History

I've been at this whole writing-about-the-Mets thing since 2005, and I think this may be my most difficult undertaking yet: compiling a 25-man roster of the best facial hair in team history. And it couldn't be a more appropriate topic for a column. Right now, we're undergoing a little renaissance in the realm of facial hair, with several Mets sporting memorable beards for arguably the first time since the 1980s. In fact, what we're seeing (or have seen) from such luminaries as Dillon Gee, RA Dickey, Tim Byrdak, Ike Davis, Manny Acosta, and others may trump anything we've seen since grooming's Golden Age, the 1970s. It's a thrilling time to be both a Mets fan and a beard afficionado.

Times haven't always been so easy. Anyone remember the Willie Randolph days, when players had to either go clean-shaven or adopt the same little mustache that he himself wore? Or even worse: the Dallas Green era? Uncle Dallas wanted none of that hippy stuff gracing the sport of Ruth, Gehrig, and DiMaggio. The 1960s in general were a dry period for creative grooming, not just for the Mets but for all major league teams. Miracle Mets? Maybe, but it'll take more than a miracle and some long sideburns to make this list. You'll notice the presence of no one from those teams below. Instead, you'll find members of those bleak, bleak 1970s teams and those triumphant 1980s teams here, as well as the most recent vintages of the club.

I should also point out that the quality of the facial hair trumps the quality of the player's actual performance on the field. The sole exceptions are those rare players whose facial hair achieved a certain iconography due, at least in part, to their play. You'll know them when they appear. Furthermore, a reminder that facial hair obviously isn't static: I've done the best I can with the pictures and mug shots available to me.

So without further ado, your 25-man roster: 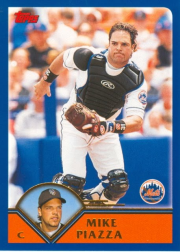 Catcher: Mike Piazza. This is one where I'm not sure how much of this is the beard and how much is Mike Piazza being Mike Piazza. Beard and man are one and the same. He could have nothing more than 5 o'clock shadow; I'd still love it. And it wasn't always present, changing shapes and occasionally disappearing altogether. He's represented here by the look I, at least, most often remember him with, the carefully manicured goatee. Other looks included a fu manchu--though that was mostly during his days as a Dodger--and a full beard. Either way, it's a Hall of Fame player and a Hall of Fame mustache. I won't try to separate the two. 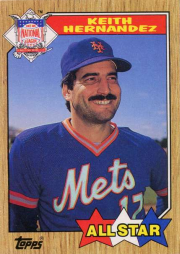 First Base: Keith Hernandez. Another case where the mustache is so iconic that it transcends what is actually present on the player's face. You can find many examples of fine mustaches in team history, especially on those 1980s teams. Keith, Wally, Davey, Bobby, Sid, all of them sported similar 'staches. None of those guys are on this list. Keith's was just different. There's something inherently classy about the way it sits upon his upper lip, at once confident and relaxed. It just says, "I'm Keith Hernandez." And unlike Piazza's, Keith's never vanished, continuing to grace Mets fans' television sets to this day. 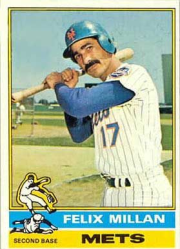 Second Base: Felix Millan. After the 1972 season, the Mets made one of the underappreciated trades in team history, shipping off reliever Danny Frisella and young starter Gary Gentry to the Braves for a young starter of their own, George Stone, and their second baseman, Felix Millan. Frisella and Gentry didn't have much left, but Stone and Millan were integral parts of the 1973 National League champions. Millan, known as "The Cat," hit .290 for that club and played for another few seasons after, even setting a club record with 191 hits in 1975. And he did it all the while with that great mustache. 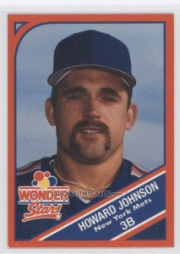 Third Base: Howard Johnson. The icon thing might fit here for HoJo, but it's also almost undeniably the best facial hair at the position in team history. At least among players who spent the majority of their Met careers at the position, his closest competition is either Alvaro Espinoza or Elliott Maddox. A historically weak position for the team in both production and style. Like Piazza's, the mustache length changed over the years, occasionally combining with a full beard or a smaller goatee, but I've elected the fu manchu to carry the day. When in doubt, go with the fu manchu. 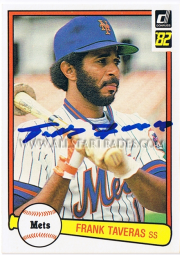 Shortstop: Frank Taveras. Taveras was truly dreadful player for the Mets. He couldn't hit--his on-base percentage with the team was a measley .297--and his fielding made him look like a good hitter. I know errors aren't the best measure of a shortstop's defense, but in 1981 he committed an astounding 24 in 79 games. Total Zone attributes him with -56 runs over his two-plus seasons with the team. Luckily for Frank, he had an awfully solid beard going, otherwise Mets fans may have taken matters into their own hands. 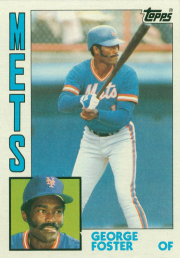 Left Field: George Foster. Foster was another big disappointment as a Met. Despite slugging 221 homers while posting a .369 on-base percentage over his previous seven seasons with the Reds, Foster's numbers took a nosedive after the Mets traded three players for the luxury of signing him to a monster of a contract. He hit just .252/.307/.422 as a Met while struggling to fit into what was becoming a hard-living clubhouse. He was released in August 1986, just a couple short months before the Mets would win the World Series. He's represented here for some rather artful landscaping on his countenance. The side burns that sweep across his cheek bones are pretty interesting, and they're not quite connected by an admirable mustache. It's a look that requires some effort, and I can appreciate that. 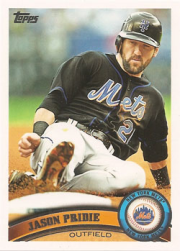 Center Field: Jason Pridie. Some people are doubtless expecting Mookie here, and I can definitely see the argument on the grounds of it being iconic like Piazza's or Hernandez's. Mookie was a Met for a good long time, and he sported facial hair the whole while. In the end, I thought it fell just short of Pridie's magnificent example of a full beard, and the very nature of this exercise benefits peak performance, so to speak. Pridie's tenure with the team was brief--though not as brief as some who appear on this list--and it wasn't especially memorable, but the beard was pretty sweet. 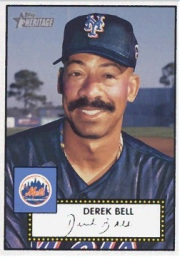 Right Field: Good ol' Operation Shutdown himself, Derek Bell. When the Mets offered Roger Cedeno, Octavio Dotel, and Kyle Kessel for Hampton, the Astros balked unless the Mets also agreed to take Bell's bloated contract and surly demeanor off their hands as well. Bell had been an All-Star in Houston, but run-ins with manager Larry Dierker had made Bell a persona non grata as far as the Astros' front office was concerned. The Mets agreed, and before anyone knew it there was a houseboat in Flushing Bay with Derek Bell's name on it. And he was a useful player in 2000 despite fading as the season wore on. He was downright phenomenal in April and May, and I'm pretty sure that Derek Bell's mustache was the missing piece that 1999 team required to make it to the World Series.

I'll be honest: the only reason Billy Baldwin didn't crack the starting lineup is because I couldn't get ahold of a trading card for him. He's the Mets' version of Oscar Gamble.

Dillon Gee. Gee is nothing special as a starter, but the beard was the definition of special. It almost looked like some Amazin' Avenue reader had performed a bad MS paint on his face, and that might be the highest compliment I can pay a piece of facial hair. Unfortunately, Mr. Gee shaved off the magnificence that was that beard earlier in the year, but it was transcendent while present. In my dark moments, while worrying that the team wasn't good enough to keep up its performance, I would just call up a picture of Gee and his beard, and suddenly everything would be okay. 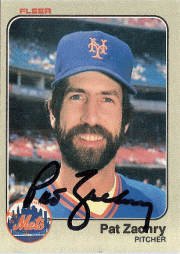 Pat Zachry. The Tom Seaver trade is often seen as an unmitigated disaster, and I certainly understand why. The Mets traded an icon away for a trio of players no one really remembers. What's often forgotten is that Steve Henderson was arguably the best hitter the Mets had over the next few seasons and Zachry was a league average starting pitcher for six seasons. It's not a good return for Seaver, but it could have been worse. It should be noted that when I mentioned to my father I was writing this column, the first words out of his mouth were "Pat Zachry." He was right. 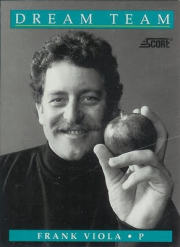 Frank Viola. I am often surprised the Frank Viola era in Shea only lasted two seasons and part of a third. And I say that as someone who lived it. It just seems to my memory, that a mustache of that quality stuck around a little longer than it did. The Frank Viola trade was the Seaver trade in reverse, but the results were not much different. The Mets traded two exciting young prospects (David West, Kevin Tapani) and a young established major leaguer (Rick Aguilera) for another team's superstar. And Viola delivered one 20-win season in 1990, but faltered in 1991 before leaving as a free agent, while Tapani became a top-of-the-rotation starter for a few years and Aguilera became one of the more dominant closers of his time while sporting a fantastic beard of his own. I would like to point out that the card shown here is one of my absolute favorites. 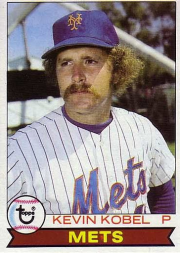 Kevin Kobel. I had no idea who Kevin Kobel was prior to writing this article. None. The Mets purchased Kobel from Milwaukee, where he'd failed to impress as a reliever in the majors and as a starter in the minors. So naturally the Mets were interested, and Kobel didn't pitch too poorly as a swingman in 1978 and a starter in 1979. He was done after that, but he's worth remembering for the afro-bushy mustache combo he's sporting here. I'm trying to pinpoint who Kobel looks like, and the best I can think of is a cross between my uncle and Gabe Kaplan. If you have a better idea, let me know below. 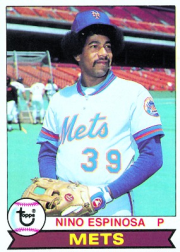 Nino Espinosa. The afro, the fu manchu. How could you not love him? Espinosa was signed by the Mets out of the Dominican Republic in 1970, and he cracked the Mets' rotation in 1977, at the age of 23. He pitched pretty well, albeit with a poor strikeout-to-walk ratio, but faltered the following season, causing the Mets to ship him off to Philadelphia during spring training, 1979, in exchange for noted gravedigger Richie Hebner. Unfortunately, Nino's career never reached the heights his hair did, and he was out of pro baseball by 1980, eventually dying of a heart attack in 1987 at the age of 34. 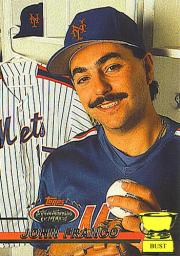 Closer: John Franco. Franco's stately mustache has reached icon-status, and I cannot think of another man who should be closing games for this team. And simultaneously causing multitudes of fans to slam their heads into walls in frustration.

The rest of the 'pen:

And, as a bonus, our coaching staff: