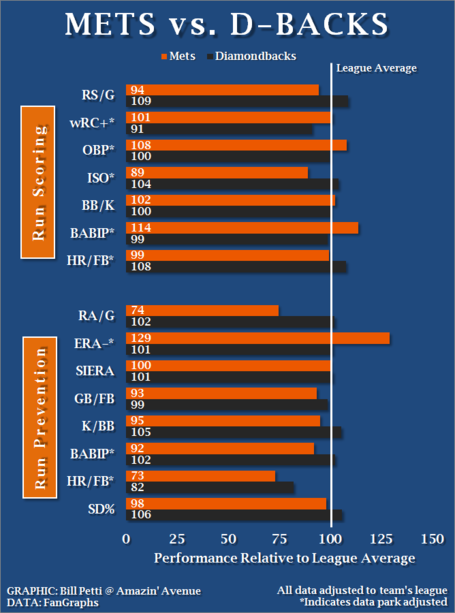 The boys from Queens were simply beaten down by the Astros, allowing 18 runs while only scoring 7. Granted, Minute Maid parks is generally much easier to hit home runs in, but the Mets pitching staff's struggles with the long ball were on display in Houston, giving up five home runs in three games in Houston. Adjusting for home park, the Mets have the worst HR/FB ratio against in the National League, third worst in all of baseball (worst on the road in the NL, 17.2%).

Combine their inability to keep the ball in the park with their sub-par defense (park-adjusted BABIP against of 92), and it's no wonder they are giving up runs at a terrible rate (ERA- of 129, where lower is better).

This isn't a good combination with the Diamondbacks coming to town. Arizona tends to put runs on the board (4.5 runs per game), in particular through the long ball (HR/FB ratio of 11.3%). However, their adjusted runs created suggests their offensive prowess might be less robust on the road. The Diamondbacks do have a below average OPS+ against extreme flyball and groundball pitchers. Dillon Gee and R.A. Dickey have almost a 2:1 GB/FB ratio (Johan Santana is closer to even so far this season), so there is hope for a series win. However, if they get bit by the long ball they could just as easily lose two out of three.

For more great Diamondbacks coverage, be sure to check out AZ Snake Pit.