What Are The Mets Going To Do About This Bullpen?

Share All sharing options for: What Are The Mets Going To Do About This Bullpen? 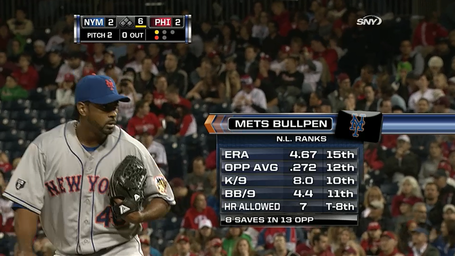 Obviously on it's face that's already not a good thing. But what makes it worse is that what little resources Sandy Alderson had this offseason, he allocated to the relief corps. Because in 2011, the Mets had -- you guessed it -- a crappy bullpen. They posted a 4.33 ERA, they were fifth in blown saves, 11th in runs allowed/game and 11th in inherited scoring %. All in all, a bad collection of pitching talent.

And obviously things are going no better this year. Now perhaps that's because the key acquisitions were a troika of 30-somethings, one a goliath who -- despite quite a fearsome demeanor -- has a mediocre 3.86 ERA since 2008. The other a so-called closer with a similarly mediocre career 3.80 ERA. And the third -- Ramon Ramirez -- should get better but let's not forget that this is the same guy Boston dumped just two years ago after he posted a 4.46 ERA. But let's not dwell on the crapiness of the current situation. Let's figure out how to make things better.

As we've already gone over, all available funds have likely been spent. Maybe Sandy goes shopping in the deep discount aisle looking for a flier come the trade deadline, but chances are he won't. Or at least won't find anything good. That leaves internal options. And fortunately they've actually got a few of those. 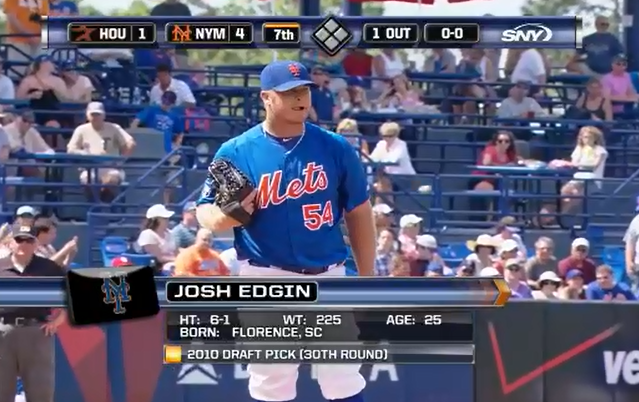 We all know about 25-yr old power lefty Josh Edgin (pictured, right) from his time with the big club during spring training. The 2010 30th rounder was masterful over ten+ scoreless innings, showcasing a low 90's heater and a razor blade slider that screamed late relief.

Since then Edgin dominated his way out of Double-A, posting a sub-2 ERA over six outings. However, he's now finding that Triple-A is a tougher road to hoe. Through seven outings his ERA is sitting above seven, his walk rate is way up and he's allowed at least a hit in each of his appearances, including five to lefties.

Now while that doesn't sound very promising, all it means is that he needs time to adjust to a new level. Like 99% of prospects. His strikeout rate is actually up -- to over a K/IP -- and his stuff has been as dynamic as ever. If he can throw a few more strikes early and begin to get batters chasing late, the big southpaw should hopefully get back on track and represent the club's best in-house relief option by midseason. 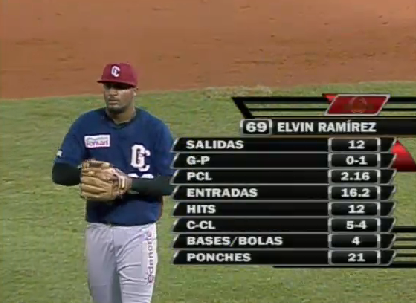 Next is another hard-thrower just optioned up to Triple-A Buffalo, 24-yr old Elvin Ramirez (pictured, left). The 2010 first overall selection by Washington in the Rule 5 Draft was returned to the organization this spring and has lived up to the Nationals' scouting report. In fact in eight appearances with Double-A Binghamton, Ramirez posted a 1.38 ERA, fanning 16 batters in 13 IP while allowing just seven hits. In his first two outings in Triple-A he's yet to allow a run.

Even better, he's showcasing the mid-to-high 90's velocity that's blossomed later in his pro career. Just as with Edgin, this is a major league caliber offering that's just overpowering hitters at the minor league level. Now his secondary stuff lags behind the heater and he'll have to watch his command but he would definitely represent another interesting internal option should he get that chance.

24-yr old Armando Rodriguez (pictured*, right) profiles much like Ramirez, big righty with a big arm. As a career starter, the big-bodied righthander has thrived in his first season out of the 'pen, posting a sub-1 ERA with Double-A BInghamton. In 19 IP, he's allowed just seven hits, four walks and he's whiffed 13 batters. His typically low 90's heat is playing up in shorter stints which has been too much for Eastern League batters.

He'll almost certainly need some more seasoning as those 19 IP are his first and only career innings above A-ball. But like Ramirez, he may represent a good internal option later this season on the strength of his fastball alone.

You may not remember that 23-yr old Adrian Rosario was the minor league piece of the K-Rod package. He doesn't care, the lanky righty is absolutely dominating the Hi-A Florida State League anyway. Using a good low 90's fastball with excellent movement he's carving up hitters to the tune of a 1.13 ERA in 16 innings, including four hits, four walks and 21 strikeouts(!). He also features a well-developed change.

Now by no means does this mean he's ready for the show, but in just his first full season of full-time relief it does mean that he's almost definitely prepared for the next level. In fact, with numbers this good -- and a somewhat advanced age for his level -- Rosario could represent the type of reliever that moves extremely fast.

Finally, lest we forget there's always Pedro Beato. Currently sidelined with right elbow tendinitis, the 25-yr old showed flashes in 2011, though likely represents no more than capable, cost effective middle relief for the big club should Sandy find any takers in the annual push for reliable, veteran arms around deadline salary dump time.

Now are any of these guys the savior the Mets need to shore up this shoddy 'pen? Probably not. Are they all rather unknown commodities? Yes, there certainly are. But that's the point. The Mets have accumulated a number of relatively known commodities at the major league level; problem is what we know is that they clearly won't be enough if the Mets actually plan to compete this summer. And I don't know about you but I'm approximately one more Manny Acosta blow-up from pulling the rip cord on some of the known commodities and seeing what we've got in this mix of hard-throwing youngsters.

NOTE -- This was meant to be a look at a few of the minor league relief prospects so I did not include journeymen. However, I should probably point out RHP Justin Hampson and RHP Fernando Cabrera down in Triple-A Buffalo.

The 32-yr old Hampson has posted a 1.62 ERA through 16+ innings, including 12 K's and 0 home runs. Hampson is weird in that he posted a couple of sub-3 ERA's in '07-'08 with the Padres then hasn't seen the majors again. In fact, he bounced around Indy ball in the interim. I think that almost certainly means he must have had some serious arm problems, but it looks like he's back to being pretty effective now.

The 30-yr old Cabrera has been even better, posting a 0.68 ERA over 13+ IP, with just four walks, 0 homers and 9 K's. Watching him, he's more of a curveball artist that slices up minor leaguers with all sorts of secondary stuff. Likely wouldn't translate to the majors (see: Carrasco, DJ) but a sub-1 ERA is a sub-1 ERA.