Mets Win Another One In Phunhouse Philly

Share All sharing options for: Mets Win Another One In Phunhouse Philly 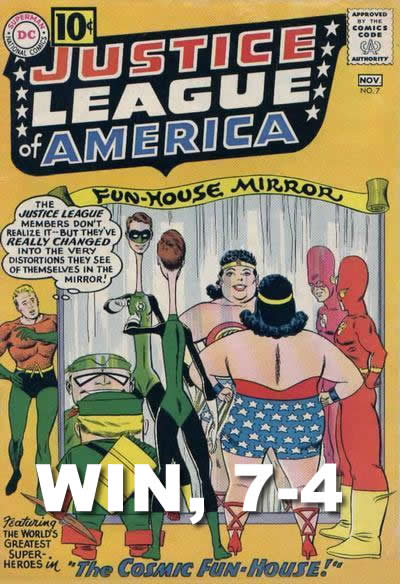 I'm sure you remember 2007, even if you don't want to. That year, it seemed every time the Mets played the Phillies--particularly at Citizen's Bank Park--they were doomed to lose. And they were doomed to lose in weird ways. Baffling, monstrous, you gotta be friggin' kidding me ways. The way that only the teams the Baseball Gods hate can lose.

That is why this series in Philadelphia has been so eerie: It has evoked all those terrible, deeply repressed feelings, but in reverse. Back in 2007, the Mets lost a game in Philadelphia when Aaron Heilman failed to field a dribbler in front of the plate. They lost another when Marlon Anderson was called for interference on a play that otherwise would have scored the tying run. Yesterday alone, we saw mirror images of both plays, but in both cases, the play in question either benefited the Mets or did them no harm. That's not supposed to happen to the Mets, in Philadelphia, or ever, really.

I'm still not sure Monday night's game really happened, and now I have to say the same of Tuesday night's. It did not have the sublime ending of a rookie hitting a go-ahead homer against one of the game's top closers. Tuesday brought a far more messy affair. And yet, once the Mets started scoring in this one, the feeling emerged that they would not only tie things up, but prevail, and in some strange manner that would be a total gut-punch to the opposition. 2007 in a funhouse mirror.

Consider, for example, that the Mets sent Miguel Batista to the mound to start this one, and that in the early going he looked very Miguel Batista-ish. In the bottom of the first, Batista allowed a one-out hit to Juan Pierre, which is not easy to do. It is easy, however, to give up a home run to Hunter Pence at Citizen's Bank Park, especially if you're Batista. Pence parked on of his mild offerings into the center field seats for a two-run homer.

In the second, last night's hero Jordany Valdespin contributed to another Phillies run when he tossed a grounder off the bat of John Mayberry into the field level seats. Then, he was unable to field an admittedly terrible pickoff throw from Batista that allowed Mayberry to move to third. A rope up the middle from Pete Orr scored Mayberry. A stolen base by Orr and a walk to Rollins preceded a double in the gap by Shane "Whaddya Mean I Gotta Be Able to Touch the Bag?" Victorino to plate another, giving the Phils a 4-0 lead.

That lead seemed more than enough, as Joe Blanton cruised in the early going, his only blemish a walk of Kirk Nieuwenhuis in the top of the first. Blanton is one of those pitchers who simply doesn't look very good, either in terms of his stuff or his physicality (he strikes me as the kind of guy whose favorite food group is Funyuns). And yet, I feel like the Mets have always had difficulty against him since he arrived in Philadelphia. The numbers don't quite bear that out; his splits against the Mets are actually pedestrian at best. Maybe it's because he's so thoroughly mediocre that any measure of success he has against the Mets appears that much more infuriating. But to be fair, Blanton kept the ball on the ground, as is his wont, and was able to break off some impressive curveballs tonight. The Mets' batters were hard pressed to do anything against him for a good chunk of this game.

Blanton did bend a bit in the fourth when he ceded a leadoff double to Nieuwenhuis, who came around the score on a Daniel Murphy single. But the Mets also got the leadoff man on in the fifth, when Mike Nickeas was hit by a pitch to start things off, and the sixth, when Wright doubled his way on, and were turned away both times.

Batista improved a tad as the game wore on, his pitches no longer bounding off the Phillies' bats with laser speed. He was finally chased from the game in the sixth after giving up a one-out single to Mayberry and a double to Pete Orr. Manny Acosta contributed a grounder and K to keep the score at 4-1. (Yes, the Manny Acosta who pitches for the Mets.) At the time, Acosta's effort seemed too little, too late, but it would prove enormous.

The Mets got the leadoff man on base once again in the seventh when Valdespin worked a walk. The way this game was going, that seemed like bad luck, and the two quick outs that followed bolstered that viewpoint. Then, Andres Torres and Nieuwenhuis singled, finally pushing another run across the plate against Blanton.

The hefty righty gave way to Chad Qualls, who ceded an RBI single David Wright. Carlos Ruiz fielded the relay throw on the single and saw Wright was trapped between first and second. It was some uncharacteristically bad baserunning by Wright, exacerbated by the fact that Nieuwenhuis was stuttering down the third base line, undecided if he should break for the plate.

The saving grace came in the form of Orr, who abandoned his pursuit of Wright to attempt to nail Neiuwenhuis at third. His throw skipped away into foul territory, allowing Nieuwenhuis to score the tying run and Wright to dash all the way to third. Antonio Bastardo relieved the star-crossed Qualls and gave up an RBI single to Lucas Duda. Somehow, the Mets had a 5-4 lead. I've written it all down and I still don't quite understand it, but look, there it is.

Ramon Ramirez took the hill in the bottom of the seventh and allowed a one-out walk to Shane Victorino. He was bailed out by Wright, who made a great play on a sharply hit grounder by Hunter Pence and turned a sure hit into a force out.

In the bottom half, with Ramirez still on the mound, leadoff batter Placido Polanco beat out an infield hit that Murphy almost made an amazing play on, then advanced to second on a while pitch. After a sharp lineout to second, Ramirez uncorked another wild pitch to move Polanco to third. Ramirez knuckled down to fan Orr, then gave way to Tim Byrdak, who induced a fly to shallow center field that Torres chased down ably.

The Mets wasted yet another leadoff baserunner in the eighth, but they tacked on in the ninth when pinch hitter Mike Baxter walked, went to third on a Torres single, and scored on a Nieuwenhuis sac fly. Duda followed with a single to drive in Torres, expanding the lead to a comfortable three runs. Frank Francisco had pitched the last three games, so that left closing duties up to Jon Rauch, who did so with little incident.

These last two games don't make up for 2007, by any stretch of the imagination. Those scars run deep, friends. And it is still May, last time I checked. However, winning these games the way they did where they did...it is satisfying, no question. And yet, it's very strange, too, as if I am now benefiting from a hex that once plagued me.

So, dust off your brooms, I guess? Wow, even that feels weird to say. I think I'm gonna lie down for a while. 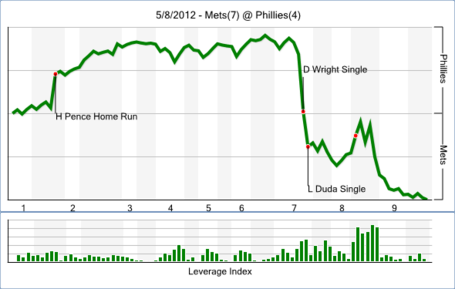