Share All sharing options for: This Date In Mets History: May 9 — Marvelous Marv, Cameramen Ejected, And Jerry Buchek's Birthday

On May 9, 1962, the Mets traded a PTBNL to the Baltimore Orioles for Marvelous Marv Throneberry, who hit a less-than-marvelous (but hardly awful considering the offensive era) .240/.302/.418 in parts of two seasons.

On May 9, 1984, two SportsChannel cameramen at Shea Stadium were ejected by umpire Joe West for showing two Mets — third base coach and future manager Bobby Valentine and pitcher Mike Torrez — replays from the game. The footage shown was of a controversial call from an earlier inning in which Hubie Brooks was thrown out home on a two-out single by Ron Darling. Here's the AP story: 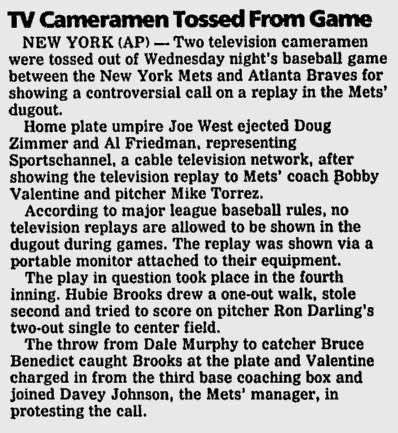 On May 9, 1986, the Mets beat the Reds 2-1 behind Bob Ojeda, who struck out ten and walked just one in eight innings. Roger McDowell pitched a 1-2-3 ninth for the save. The Mets managed just three hits of their own in seven innings against Cincinnati starter Mario Soto and went hitless against John Franco in the eighth. With the win the Mets improved to 19-4.