Finally! Johan Santana's No-Hitter A First For The Mets

Share All sharing options for: Finally! Johan Santana's No-Hitter A First For The Mets 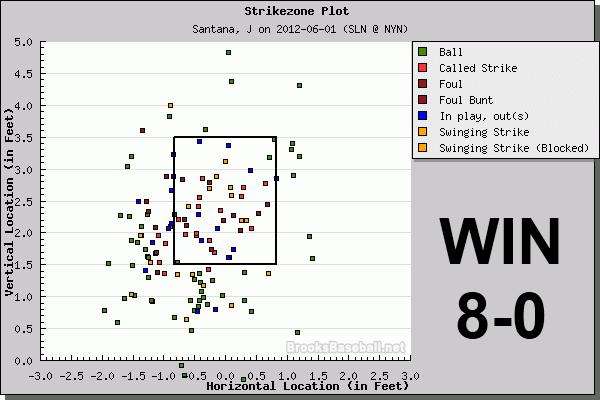 I am speechless. I am without speech. - Elaine Benes

It's hard to put Johan Santana's no-hitter into words. In the team's 51st season of baseball, Santana did what no Mets pitcher has ever done before. If you missed it, the game will re-air tomorrow on SNY. It will also be available in the MLB.tv archives, and it would be worth the price of a subscription just to go back and watch it.

As far as no-hitters go, Johan's was a marathon. He threw 134 pitches, 77 of which were strikes, with 8 strikeouts and 5 walks.

Through the first five innings of the game, Santana had issued four of his five walks, but everything else he did was great. In the top of the sixth, Carlos Beltran nearly broke up the no-hitter, but the third base umpire ruled his line drive that hit the chalk beyond third base a foul ball. Beltran ultimately grounded out in the at-bat, and Santana set down the next two batters he faced. Six innings in, it was really time to start thinking about the no-hitter.

David Freese popped out to begin the seventh, and Yadier Molina stepped into the box next and hit a ball to the warning track in left field. It looked like he had broken the hearts of Mets fans yet again, but Mike Baxter did everything he possibly could to track down the ball and make an outstanding catch. He slammed into the fence and had to leave the game immediately with an injured shoulder, but he made the catch. Santana got the next out to end the inning and preserve the no-hitter.

By that time, Santana's pitch count was well beyond what he would normally be permitted to throw, especially this year There was no way he was coming out of the game, though.

As his pitch count climbed, Santana continued to retire the Cardinals. Tyler Greene hit a pop up to left field to begin the eighth inning, and Kirk Nieuwenhuis just barely caught the ball as he and Omar Quintanilla nearly collided with the ball in the air. Santana then nicked Shane Robinson on one of his knuckles with a pitch, but Robinson was not awarded first base. Johan then struck him out looking.

Santana walked Rafael Furcal next — his fifth and final walk of the game – before inducing a soft line-drive out from Carlos Beltran that Daniel Murphy caught as he cut in front of Quintanilla.

In the ninth, Matt Holliday and Allen Craig lined out quickly, and Santana was just one out away from history. He then struck out David Freese on a changeup to end the game. It was real, and it was spectacular.

Ever since Santana's shoulder surgery in 2010, there was never a guarantee that he would return to the mound for the Mets. After missing all of 2011, Santana made the 2012 Opening Day start, and he's been excellent all year. But with his no-hitter — his second straight complete-game shutout, by the way — Santana has forever etched his name in the history of the New York Mets. 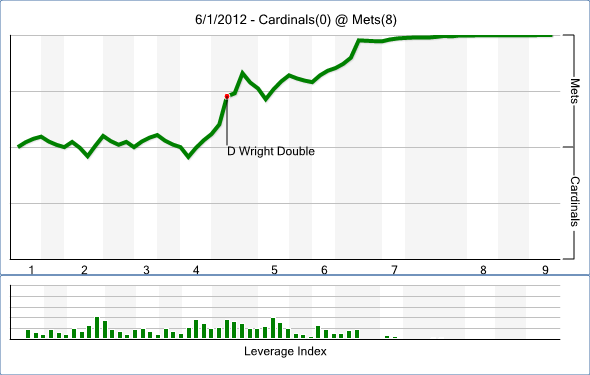