Share All sharing options for: Mets Avoid Blowout But Lose To Yankees Again

The Mets lost to the Yankees again on Saturday night, but the game seemed well within reach until it came to a disappointing end.

The Yankees scored first when Alex Rodriguez singled to plate Derek Jeter, who had singled to begin the inning and advanced to second base on a balk. Shortly thereafter, the bases were loaded, but Dillon Gee induced an inning-ending double play from Raul Ibanez. What could have been another early blowout was instead a minor deficit for the Mets.

Omar Quintanilla, who had just 2 home runs in 617 plate appearances in his major league career, hit a solo shot in the third inning to tie the game. The game remained tied at one until David Wright hit a solo home run in the sixth inning to give the Mets their first lead of the game and weekend.

The lead didn't last very long, though. Gee had a very good start overall, but he walked Curtis Granderson to begin the bottom of the sixth. He recorded two outs and got ahead of Mark Teixeira in the count, but Teixeira hit a line-drive home run to right field to give the Yankees a lead they would not relinquish.

The Mets certainly had their chances to knot the game again, but Andres Torres, who had an 0-for-4 night with 3 strikeouts, flied out to left field with runners on second and third and two outs in the seventh.

The Mets were retired in order in the eighth, and Bobby Parnell gave up a solo home run to Granderson that inning to increase the deficit to two runs.

In the ninth, the Mets again had an opportunity to at least tie the game, but with two outs and runners on the corners, pinch hitter Jordany Valdespin flew out to left to end the game.

It's too bad that Dillon Gee's start went to waste, but the Mets have had an awfully tough time scoring runs against the Yankees thus far. They'll try to reverse their luck and avoid a sweep tomorrow at 1:05 pm. Jon Niese starts for the Mets, and Andy Pettitte starts for the Yankees. 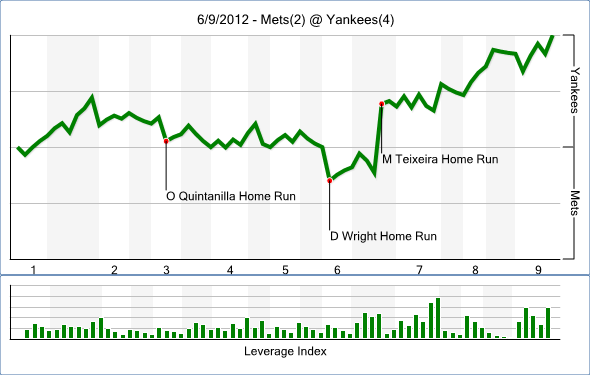