Share All sharing options for: The Lost Weekend: Mets Swept By Yankees

It was a very long week of baseball for the New York Mets. Having taken three games from the Cardinals last weekend, the Mets won just one of their next seven games. The last three losses, of course, came at the hands of the hated Yankees.

The Mets scored first this afternoon, plating three runs in the second inning with Andy Pettitte on the mound for the Yankees. Scott Hairston doubled, as he often does against left-handed pitchers, and scored one out later on a Vinny Rottino single. Rottino stole second, Omar Quintanilla drew a walk, and Mike Nickeas reached on a ground ball that may have ended the inning with a double play had Robinson Cano not booted it.

With the bases loaded, Jordany Valdespin grounded a double past Mark Teixeira to score Rottino and Quintanilla. Andres Torres walked to reload the bases, but Jason Bay and David Wright each struck out swinging to end the inning. Given the dimensions of Yankee Stadium and the Yankees' powerful lineup, it felt like the three runs the Mets scored in the inning were inadequate.

For six-and-two-thirds innings, however, Jon Niese held the Yankees scoreless. He should have had seven scoreless innings, too, but David Wright made a throwing error with two outs and nobody on base in the seventh to extend the inning. Russell Martin followed up with a routine line drive to right field that turned into a home run when Scott Hairston couldn't quite reach it and it bounced off the top of the fence and into the stands.

Niese retired the next batter he faced to finish the seventh, but that was the end of his outing. Because of Wright's error, both runs he surrendered were unearned, and he had 6 strikeouts and just 1 walk. Niese threw 100 pitches, 62 of which were strikes, and now has a 3.69 ERA on the season.

Clinging to a one-run lead in the bottom of the eighth inning, Bobby Parnell took the mound. For the second time this week, his defense failed him miserably. Derek Jeter led off with a weak, slow ground ball to short, but it went right under Quintanilla's glove as he charged it and slowly dribbled to the outfield grass. Jordany Valdespin, who looks like one of the worst infield defenders in the history of baseball, was in no rush to back him up, and by the time Kirk Nieuwenhuis got to the ball, Jeter was able to reach second base with ease.

Curtis Granderson singled off Parnell, but Jeter was held at third. Mark Teixeira then hit a ground ball up the middle that tied the game, and Alex Rodriguez hit a pop up that fell into no-man's land in shallow right field to give the Yankees the lead. With that, Terry Collins turned to Tim Byrdak, who notched two outs, and Jon Rauch, who struck out Andruw Jones to end the inning.

But the game wasn't quite over yet. Lucas Duda and Ike Davis — yes, Ike Davis — each doubled to begin the inning, and the game was tied. Davis got thrown out at third base on a weak grounder to short by Quintanilla, but the Mets had runners on the corners with just one out after a Daniel Murphy single on a hit-and-run. Terry Collins pinch hit for Valdespin with Josh Thole, who struck out, and Nieuwenhuis grounded out to second to end the inning. It was the second time this afternoon that the Mets had wasted a great opportunity to score.

Rauch remained in the game to start the bottom of the ninth, and very shortly thereafter Russell Martin hit a home run to left field to hand the Mets a walk-off loss. After the game, Rauch told reporters he is not pleased by his performance this year. 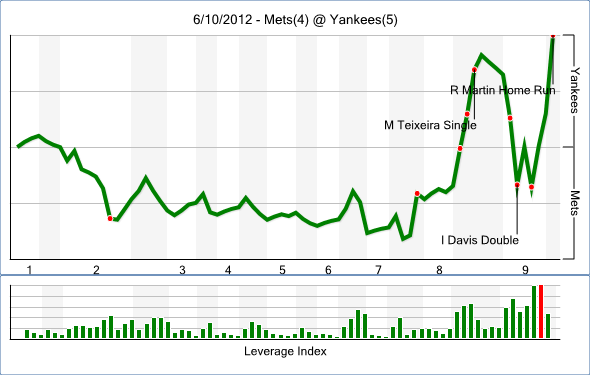