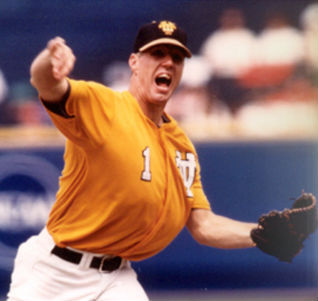 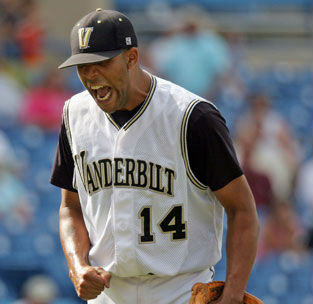 I own three pitcher jerseys:

For the time being (and for all future time), let's ignore #3 and focus on today's pitching matchup: R.A. Dickey vs. David Price.

David Price graduated from Blackman High School and went on to star at Vanderbilt. He went 11-1 in his junior season at Vandy (the 1 being a blown save in the team's elimination from the College World Series tournament).

You know R.A. Dickey's story -- it's quite different. Interestingly enough, though, it started similarly to Price's. And had R.A. a UCL, he might be a pitcher quite like Price.

Both pitchers' stories also feature a turning point defined by the threat of quitting -- each characteristic of their careers: a freshman Price, petulant in Vanderbilt coach Tim Corbin's office, threatening to go work at McDonalds, and a 30-something Dickey, beaten down by bad luck, seemingly at the end of his rope.

Whatever their differences, though, they're the two biggest baseball players in the world with ties to Nashville (sorry J.P. Arencibia and Dan Uggla). And I don't need the google boys in the production van yapping in my earpiece to know that there has never been a Nashvillian starting for each league in the All-Star game -- a distinct possibility this season.

Price and Dickey are a collective presence in the Nashville community, often joining forces for instructional youth camps and charity fundraisers. But the palling around ends today: this is a matchup filled with rivalry, both regional to Middle Tennessee and elemental to the sport of baseball:

I'm going with another honorary lineup card, since I don't know what the lineups will be today (who cares?).

My only rules here are that the players are not currently in college and not so old or young they would get smoked. This is a game that could be organized tomorrow and played at a major league-ish level.