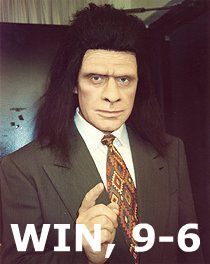 Even if he wasn't watching today's Mets-Rays contest, Rickey Henderson was probably smiling somewhere when Kirk Nieuwenhuis hit the second pitch of today's game over the right field fence. Nieuwenhuis may never match Rickey's all-time record of 81 leadoff home runs, but his opening dinger put the Mets on the path towards completing a three-game sweep in Tampa-St. Sweepersburg. He further bolstered his burgeoning Rookie of the Year campaign with a tie-breaking two-run home run in the fourth inning. It gave the Mets a 6-4 lead, a lead they would not relinquish.

Jason Bay joined Nieuwenhuis in the Bombs Away Club, hitting a solo home run in the second inning. It was the first sign of life Bay has shown since coming off the disabled list. Keith Hernandez commented "maybe this will get him going," a line he has said following each Bay home run since 2010. Who knows, maybe it will get him going. It better, considering the upcoming logjam in the Mets outfield post-DH fight for playing time in the Mets outfield. 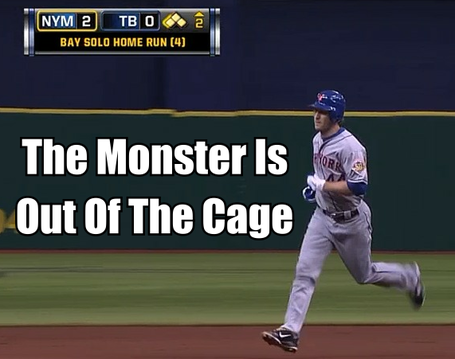 Lucas Duda struck the other big blow in the game, a two-run double in the fourth inning to make the score 8-4, chasing ineffective Rays starter Jeremy Hellickson. David Wright reach based four times and Ike Davis three times to further bolster the offense.

For the second start in a row, Johan Santana's best stuff eluded him. His velocity wasn't terrific, and he uncharacteristically had trouble with his control. Just 51 of his 96 pitches went for strikes. That translates to 53%, below his season rate of 63%. He was pulled with no outs in the sixth inning and the bases loaded, finishing with four runs allowed on six hits. It might have been a few more runs if not for Jon Rauch's terrific relief work. Rauch entered in a tough spot but retired all three Rays he faced, two of them on strikeouts. It was a high-leverage spot and he acquitted himself nicely. Bobby Parnell and Tim Byrdak did as well, pitching clean frames in the seventh and eighth innings, respectively. Miguel Batista couldn't do the same in the ninth.

After recording the first out on a grounder to Wright, Batista allowed a walk and two singles. Terry Collins saw enough and went to Frank Francisco. The stress didn't end, as Omar Quintanilla tried to step on second base to force out Desmond Jennings on a Carlos Pena ground ball instead of taking the sure out at first base. A run scored on the play, making the score 9-6 with the heart of the Rays' lineup looming. Francisco locked it down though, striking out Gary Cohen's least-favorite player B.J. Upton, walking Hideki Matsui, and striking out Ben Zobrist on a check-swing to finish it.

The Mets return home for a three-game weekend set against the first-place Cincinnati Reds. Friday's pitching matchup is Dillon Gee vs. Bronson Arroyo. 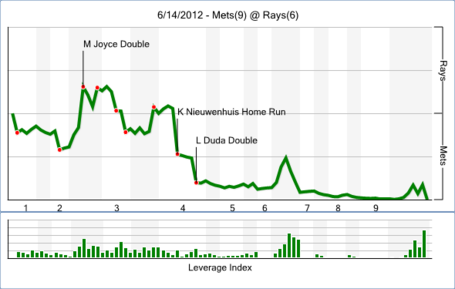