Share All sharing options for: Johan Santana's Return To Form

With all of the buzz about R.A. Dickey these days, it's important to remember just how good Johan Santana has been this season in his return from shoulder surgery.

After missing the entire 2011 season because of his injury, there was no guarantee that Santana would be ready to throw this year. Even if he did, there was plenty of skepticism about just how good he could be. Much of that skepticism was put to rest when Santana threw the first no-hitter in Mets history. Even without that historic game, though, Santana's performance this year has been exceptional.

What's incredible about what Santana is doing this year is that he is once again working with diminished fastball velocity. His average fastball velocity dropped from 93.1 mph in 2006 to 89.4 mph in 2010, but so far this year it has averaged 88.4 mph. As far as strikeouts are concerned, it doesn't seem to matter. 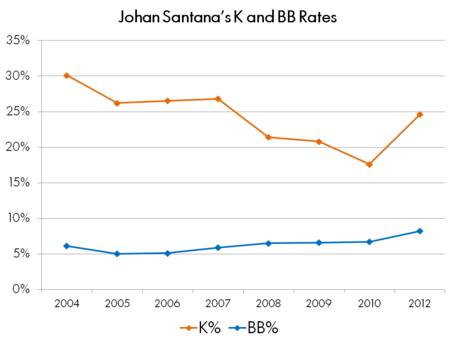 Johan is striking out batters more frequently than he has since he was with the Minnesota Twins. If there's any cause for concern, it is that his walks have steadily been on the rise for the past few seasons. The increase this year is Santana's first venture north of a 7.0% walk rate since he became a starting pitcher.

Fourteen starts into the year, Santana has a 3.00 ERA, 3.29 FIP, and 3.73 xFIP, all of which suggest he's been just about as good as he looks. And xFIP has never had a good handle on Santana, as he's outperformed the ERA estimator by limiting home runs to lower than the league average rate for the grand majority of his career. On top of that, opponents have a .262 BABIP against Santana this year. While that's on the low end, it is just a little bit lower than Santana's .274 career mark. In short, there doesn't appear to be much, if any, regression in store for Santana.

With Santana and Dickey pitching the way they are, the Mets' greatest perceived weakness before the season — starting pitching — now appears to be the team's greatest strength.