Share All sharing options for: Mets OPS By Position

It's obvious that David Wright has been awesome this season. What's not so obvious is the degree of his awesomeness. How has he produced at the plate compared to the rest of the third basemen in the National League? This exercise aims to provide context to the Mets' offensive performance by position. Without context, statistics are meaningless.

Here is the Mets' OPS by position, along with the National League average OPS for each position.(Note: OPS = on-base percentage + slugging percentage; PH = pinch hitter): 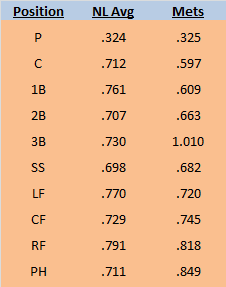