Checking In On Jon Niese's Season

Share All sharing options for: Checking In On Jon Niese's Season

Jon Niese, who will start against the Yankees tonight at Citi Field, is thirteen starts into what was predicted by many to be his breakout season. Niese made just eight starts with the Mets between 2008 and 2009, but he made thirty starts in his first full season in 2010 and another twenty-six starts last year.

Over the course of his major league career through 2011, Niese had a 4.39 ERA, but his peripheral statistics suggested that he was pitching better than his ERA indicated. With rates of 7.65 K/9 and 2.99 BB/9 and an approximately-league-average 0.90 HR/9 allowed, several defense-independent ERA estimators suggested that he deserved better results. 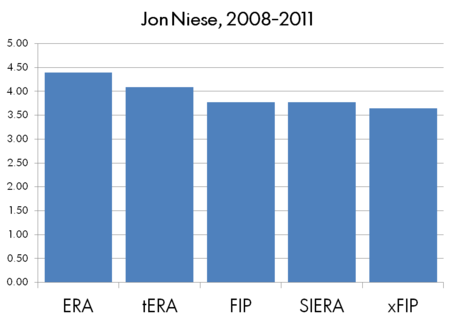 Even tERA, which takes into account the types of batted balls a pitcher allows — ground balls, line drives, and fly balls — and liked Niese the least, suggested that he should be better than his ERA. Of course, SIERA takes batted balls into account, too, and rated Niese much more favorably than tERA.

It's worth pointing out that Niese's .328 batting average on balls in play was the second highest rate among starting pitchers between 2008 and 2011. The Mets have not been a gifted defensive team for most of Niese's career, but some pitchers never quite end up with BABIP near league average. It looked like a high BABIP might be something Niese would have to deal with. 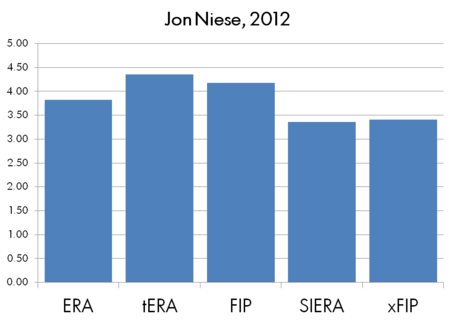 The data from this season is based on just 75.1 innings, however, compared to the 370.2 innings Niese pitched over the past four seasons. So far, Niese has produced better results than he did in past years, but his propensity to issue walks and allow home runs is concerning for now. Given his long track record of high BABIP, his 2012 number looks very likely to increase, but it's not very likely to get all the way up into the .320s like it did in years past.

Looking at the big picture, the large body of data from years past that predicted Niese would see improvement in his ERA looks correct. Whether or not Niese continues to improve will depend on his ability to address his walk and home run issues. If he can, odds are he'll have his breakout season.