Share All sharing options for: Mets Toppled Again in That Toddlin' Town 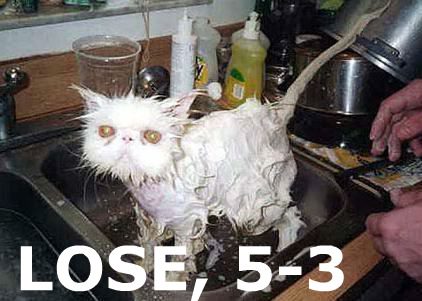 On Monday, the excuse for the Mets' sluggishness was a letdown from the Subway Series, coupled with a late plane ride. Tuesday is anybody's guess. Deep dish pizza overdose? Haunted hotel rooms? Late night Ferris Bueller-themed city tour? Whatever the reason, the Mets barely upgraded their condition from dead to comatose, and only escaped more E's in their boxscore thanks to some favorable scoring. This was not a crisp game from either side--not even from foul territory, as balls from the on-field bullpens kept skittering into play. The Cubs have the worst record in a baseball and definitely looked like it at times, but it was still the Mets who got the L hung on their record.

Kirk Nieuwenhuis started the game with a walk against Randy Wells, the Cubs' righty whose fallen on some hard times after a promising start to his career. However, Captain Kirk was promptly thrown out trying to steal second base on a very close play, and the next four Mets went quietly.

But with two outs in the second, the Mets did what they've done all year with two outs, stringing together singles from Scott Hairston, Daniel Murphy, and Josh Thole to score the game's first run. Dillon Gee followed with a broken bat looper into very shallow center to drive in another. You might have thought this was a prelude to a return to form but oh, you would have been a naive young thing to think that, wouldn't you?

Gee's time on the mound proved a tad more difficult than his RBI, as the Cubs preferred to get their baserunners earlier, getting the leadoff man on in the first four innings. He got into some trouble in the bottom of the first by surrendering a leadoff single to David DeJesus. One out later, Anthony Rizzo got on base in his first major league at bat when his hard hit grounder bounced out of Ruben Tejada's glove. (Hometown scoring gave the hotly anticipated Cubs prospect a single rather than give Tejada an error.) Gee avoided further trouble by striking out Alfonso Soriano and getting Bryan LaHair to fly out to left. In the second, Luis Valbuena beat out an infield single, but Gee worked around the next three Chicago batters.

The Mets made another bid for two-out magic in the third, when Lucas Duda walked and Ike Davis knocked a double into the right field corner. Duda, however, ignored the go-sign from TIm Teufel and stayed anchored to third, perhaps assuming that he would be held up on reputation. Gary and Ron also noted that Teufel's signal came a bit late After a walk to Hairston, Murphy ground out harmlessly to bypass the opportunity.

That became especially costly in the bottom half of the inning, when the Cubs once again got the leadoff man on. DeJesus smacked another single, then Gee issued a walk to Starlin Castro. Subsequent groundouts from Soriano and Rizzo brought in the first Chicago run, then Valbuena belted a game-tying double off the ivy in right. Secret Australian Darwin Barney then bounced a ball up the middle that Tejada couldn't handle to plate the go-ahead run. The Cubs ran themselves out of more runs when Valbuena was caught off third on the play.

The Mets threatened again in the fourth, and didn't wait so long to do so. Thole laced a single to center, and Gee--attempting to bunt him over--took advantage of a wild Wells and walked instead. That was enough for Cubs manager Dale Sveum, who yanked Wells in favor of lefty Scott Maine. After a sac bunt from Nieuwenhuis, Maine made the unwise move of walking Tejada with David Wright on deck. Wright tied things up with a sac fly, but all things considered, Maine was very fortunate to escape with nothing else on his ledger when Duda ground out to end the inning.

Once again, the Cubs got leadoff man on when Murphy couldn't handle a Steve Clevenger grounder (already the fourth infield hit of the game). Gee got Maine to foul out on bunt attempts and DeJesus to pop up to Murphy, but a Castro bloop landed just out of the reach of Nieuwenhuis in shallow center. That allowed Rizzo to belt an RBI single into center, giving the Cubs a lead they would not relinquish.

Gee set down the Cubs in order in his last inning of work, while Jeremy Hefner did the same in the sixth, and he combined with Tim Byrdak to keep the Cubs scoreless in the seventh. However, the Mets' lineup could do absolutely nothing against the only bullpen in the majors that might be worse than their own. They saw Hairston reach on a one-out error in the fifth and Ronny Cedeno knock a pinch-hit leadoff single against new reliever James Russell in the sixth, but could not capitalize on either occasion. More of the same in the seventh, when Hairston once again reached on an error, but Sean Camp induced a Murphy groundout to strand him, and again in the eighth, when a one-out pinch hit knock from Justin Turner fell by the wayside.

If you'd watched the game up to this point, you'd have thought you'd seen all the ugly imaginable. You'd have been wrong. Hampson surrendered two one-out singles in the bottom of the eighth and was lifted for (sigh) Miguel Batista. His attempt to pickoff Clevenger at first was deemed unsuccessful by the faulty judgment of first base umpire Manny Gonzalez. When Ike Davis questioned the call, he was ejected almost immediately. This off turn of events was followed immediately by a throwing error by Tejada on a tough grounder, which permitted an insurance run to score.

Batista stopped the bleeding there, however, which gave them a puncher's chance in the ninth against the Cubs' closer, Carlos Marmol, a pitcher whose travails make those of Frank Francisco seem like a walk in the park. Marmol walked Wright to open the frame, but he set down the next three batters with little trouble, including Omar Quintanilla, who was forced into the game by Ike's ejection.

This has a feel eerily similar to the series in Houston, when the Mets were inexplicably swept by a putrid Astros team. Let us hope the symmetry ends here, and that the Mets avoid extending their longest losing streak of the season. 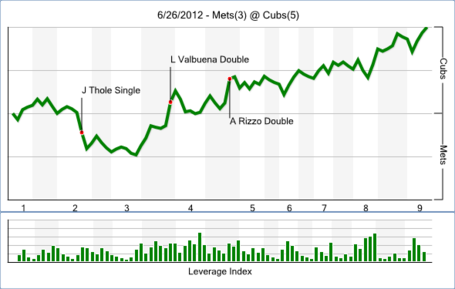