Share All sharing options for: Mets Clobber Cubbies With 4 Home Runs and 17 Runs 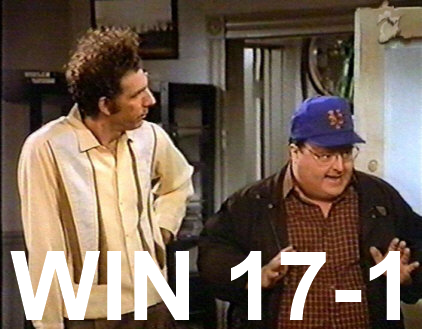 The last of the Mets' three games in Wrigley Field was close for just a few innings before it turned into a rather enjoyable blowout.

The Mets got on the board quickly as David Wright hit a sacrifice fly in the first inning to give them an early one-run advantage. Jon Niese threw a scoreless first but gave up a run in the second, and the game was tied at one. It didn't stay close for much longer.

Before getting into the Mets' offensive onslaught, it's worth pointing out that Niese threw a very good game. Although it took him 118 pitches to finish seven innings, Niese struck out six, walked just one, and allowed only one run. With the start, he now has a 3.55 ERA and continues to cause a rift among various ERA estimators. What's most important is that he limited his walks, which have been a tick higher this year than in years past.

There was no real point in having Niese throw the seventh inning, but it's possible that Terry Collins wanted to rest his bullpen as much as possible for the team's four-game series in Los Angeles that begins tomorrow. The Mets are off on Monday, too, which means Niese will get an extra day of rest before his scheduled start against the Phillies on Tuesday. If all goes according to plan, he'll pitch the Mets' final game before the All Star break against the Cubs on July 8.

Back to the offense this afternoon, there was plenty of it. In the fourth inning, Ike Davis doubled to score Lucas Duda and give the Mets the lead. One out later, Daniel Murphy hit the first Blue Collar Blast since July 16, 2011. In the fifth, David Wright doubled to plate Niese and Ruben Tejada. Duda walked, and Ike hit a three-run home run to really put the game out of reach at 9-1. Murphy hit a solo home run later in the inning to tack on yet another run.

The Mets kept scoring in the sixth, too. Wright hit a two-run single with the bases loaded, and Duda drew another walk to load them again. After Ike struck out looking on a borderline call, Scott Hairston stepped up and hit a grand slam. The Mets were up by fifteen runs. Their seventeenth and final run of the afternoon came on a ground out by Murphy in the eighth inning.

Yes, the Mets were playing the Cubs, but it was still great to see Davis and Murphy each have an excellent day at the plate. Wright and Hairston should certainly not be taken for granted, but if the Mets hope to contend for one of the National League's wild card spots or the NL East division crown, they will require offensive production from first and second base. The evidence from both players' careers suggests that improvement is not just possible but likely.

Whether you were at Wrigley Field, watching on television, or listening on the radio, today's game was one of those that makes you shake your head and smile because the Mets are doing something unbelievably fun.

The Mets open their series against the Dodgers at 10:10 pm EDT tomorrow with the Battle of Injured Guys the Mets Signed for the 2011 Season: Chris Young vs. Chris Capuano. 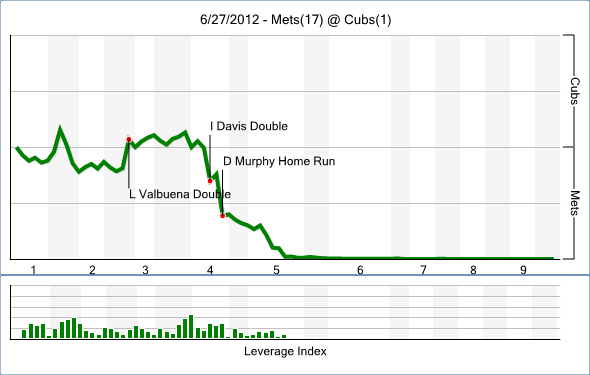