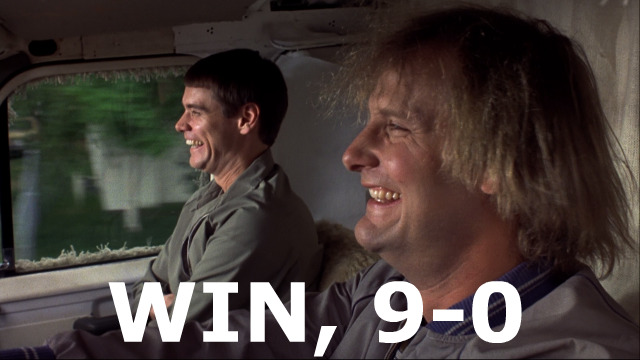 With the Dodgers missing Matt Kemp and Andre Ethier, last night's game figured to be one in which R.A. Dickey would have a shot another complete game. Although he didn't go the distance, Dickey pitched a gem, striking out ten and walking one in eight scoreless innings of work. If not for a catchable fly ball that dropped in front of Andres Torres early in the game, Dickey may have had a shot at a perfect game given the way he was pitching.

In his outing, Dickey threw 116 pitches, 81 of which — 69.8 percent — were strikes. 100 of his pitches were knuckleballs, and Dickey generated 13 swinging strikes with the pitch last night. None of the Dodgers' hitters looked very good, but Juan Uribe looked particularly overmatched by the knuckler. With the outstanding performance, Dickey has a 2.15 ERA and incredible rates of 9.24 K/9 (27.0 K%) and 1.99 BB/9 (5.8 BB%).

The Mets' hitters were no slouches in this game, either, as they racked up nine runs in total. In the first inning, the Mets had runners on first and second with nobody out and later loaded the bases with two outs, but they failed to score. Daniel Murphy struck out looking to end the inning, but with Dickey on the mound, the inning didn't seem quite as bad as it otherwise would have.

In the third inning, the Mets got on the board with a run-scoring single by David Wright. Ike Davis followed with a sacrifice fly, and the Mets were up 2-0. They addded three runs in the fifth inning, the first of which scored on a Lucas Duda single. Murphy hit a two-run double after that, making up for his earlier strikeout with the bases juiced and putting the Mets ahead by five.

The game was virtually over at that point, but the Mets poured on four runs in the seventh inning for good measure. Murphy hit a three-run home run, his third home run in the past three games, and it was a bomb to right field. Murphy's power has been missing in action for a while, but these Blue Collar Blasts are a welcome sight. Ruben Tejada, who went 4-for-5 and was plunked by Harang in the game, singled to drive in the Mets' ninth and final run of the night.

The series continues this evening at 7:15 pm with Johan Santana on the mound for the Mets and Nathan Eovaldi on the mound for the Dodgers. The game will be on FOX, robbing viewers everywhere of the voices of Vin Scully, Gary Cohen, and Ron Darling — a baseball crime if there ever were one. 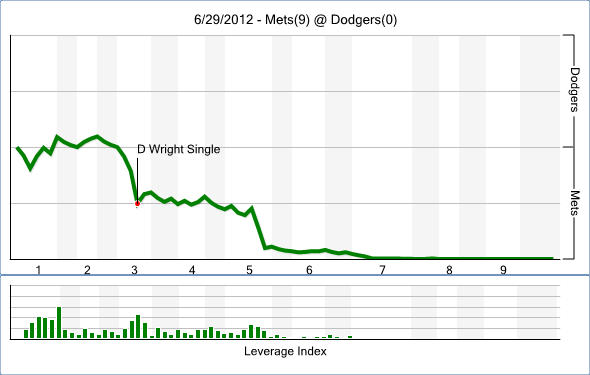