Oliver Perez Is Back, In More Ways Than One

Share All sharing options for: Oliver Perez Is Back, In More Ways Than One

Well, well, look who the cat desperate Mariners dragged in. That's right, Oliver Perez has found his way back to the major leagues. (Note: I owe somebody somewhere five bucks for that fact.)

You may not have noticed but a couple weeks back Seattle called up the veteran southpaw after he toiled away at Triple-A Tacoma for the first two and a half months of the season. At this point he's a full-time reliever, having made all 22 of his appearances this season out of the Tacoma bullpen.

That in and of itself is notable enough. Honestly, who knew we'd ever hear from Ollie again. But here's where it get's interesting. Take a look at this radar reading from his two-inning appearance in last night's Mariners-Red Sox game (click image to embiggen): 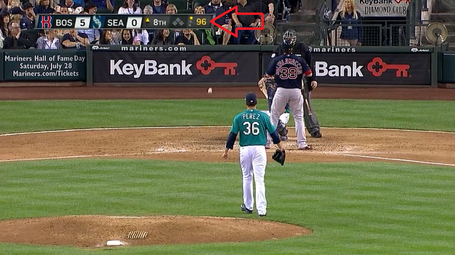 Your eyes doth not deceive you. That indeed says 96. And it was no aberration; of his nine pitches that inning, seven were fastballs and only one was delivered below 94 mph. Four were at 95 mph or above.

Oh and the two sliders? Those were his final two pitches of the inning against Adrian Gonzalez. The first -- at 81 mph -- was a called strike that gave Gonzo the jelly legs. The second -- at 82 mph -- produced a weak swing and miss to end the frame. Both were vintage Oliver Perez razor sliders.

The Mariners broadcasters -- in all their wisdom -- explained the boost in velocity by saying that a move to the bullpen allows a former starter to "let it all go" in short appearances. Makes sense I suppose. But wait a minute...no it doesn't.

Cut back to the last time we saw Ollie: March 19, 2011 in a spring training appearance, two days before he was cut for good. On this day Ollie was also pitching in relief, battling Byrdak for the lefty out of the 'pen role (ha). In total he made 13 pitches on this bright St. Lucie afternoon.

Like last night he threw mostly fastballs. However, key difference: In March he topped out at 86 mph. More often he was at 84 mph and even dropped as low as 80. Miles per hour. With the fastball. 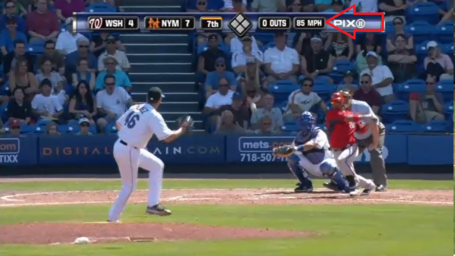 He threw just three sliders in the spring training relief appearance. The first sizzled in at 73 mph. The next two at 72 mph. Oh and two of the three were ripped to left field for long home runs.

I'm not going to get into the overall quality of his work with Seattle; after just four games his rates still haven't normalized, obviously the BB-rate being the key one for him. But we can discuss the surprising velocity/stuff. Because it's happening.

In his four appearances with the Mariners thus far his average fastball velocity has been 93.4 mph; the slider is coming in at 81.1 mph. Neither pitch has been that high since his tremendous '04 season for the Pirates. In his final season for the Mets Perez was at 88.0 and 76.5, respectively.

So what the hell?

Last spring I chalked up the apparent end of his career to the premature decline of his once special arm strength. It seemed early for a guy that just turned 30 but hey, it happens (just ask Tim Lincecum). But now no? Now he's hitting 96 again? Especially after he continually insisted he was not hurt, it's hard to make sense of.

He's definitely setting up a little differently. Left knee is clearly more bent, Overall posture is less upright. Now how about the delivery:

He's still doing the classic Oliver Perez, throw across his body thing. But his arm angle/release point looks higher again; I guess he's no longer doing that whole completely sidearm approach he adopted once the velocity left him.

So I suppose maybe he's cleaned up the mechanics a bit. Does that explain away 10-12 mph though? Not for me. Could he have had a latent injury that was holding him back? I guess, but it's not like he's taken a year off to recover or anything. He caught on with the Nats Triple-A club after the Mets cut him and pitched most of last summer and has done the same with Tacoma this year.

I guess his insistence that "I know when my velocity gets back, I'm going to be the same" was actually less ridiculous that it sounded at the time. Now the how or the why of this resurgence? We'll probably never really know.

And as such, the enigmatic nature of Oliver Perez lives on.