Mets Make It Close But Drop Series Finale To Cardinals

Share All sharing options for: Mets Make It Close But Drop Series Finale To Cardinals

The Mets never had the lead in their attempt to complete a four-game sweep of the St. Louis Cardinals, but they twice knotted the game before ultimately coming up a bit short in the end.

The Cardinals scored a run in the fourth inning, and the Mets answered with a run of their own in the bottom of the inning. When the Cardinals plated two more runs in the top of the seventh, Scott Hairston hit a pinch-hit, two-run home run to tie the game in the Mets' half of the seventh. Hairston continues to be one of the better bench players in the league this year.

Unfortunately, Allen Craig hit a two-run home run in the top of the eighth inning against Jon Rauch, who has struggled of late. Terry Collins told reporters after the game that Rauch has dealt with tenderness in his pitching elbow, which the Mets plan to have examined.

The Mets scored one run in the bottom of the eighth, but that was it as they came up short of a third comeback. Tim Byrdak and Bobby Parnell combined for 1.1 scoreless innings between the eighth and ninth innings to keep things within reach, which was a nice contrast to some of the bullpen's complete meltdowns in close games over the past few weeks.

While a four-game sweep of the Cards would have been great, Johan Santana's no-hitter, R.A. Dickey's shutout, and Jon Niese's excellent performance made for a very good series.

The Mets visit the Nationals this evening for the first of three games. Chris Young makes his return to the Mets' rotation, and Jordan Zimmermann gets the start for Washington. 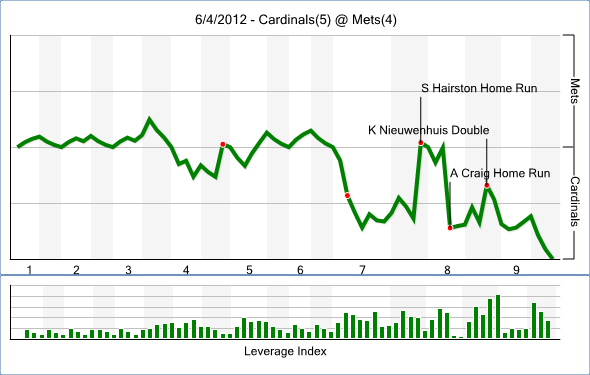