Share All sharing options for: My Favorite Highlight: "Tied at 7, Hoping for Game 7..." 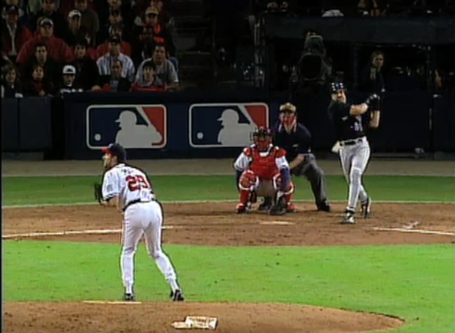 During Mike Piazza's career, fans threw many complimentary adjectives his way. However, the word "tough" wasn't often at the top of that list, which in retrospect seems baffling to me. He earned that label simply by making it to the major leagues at the game's most punishing position. Add to this the fact that Piazza probably suffered from more on-the-job hazards than many of his contemporaries, victimized by more backswings and foul balls to the mask (and other places) than other catchers. This last part is nigh impossible to prove or quantify, of course, but it certainly seemed to be true at the time. He once told Mets play-by-ply man Gary Cohen that he thought it was simply a function of being larger than other backstops.

The 1999 season was particularly punishing to Piazza. As often happens with catchers, Piazza's numbers sagged as the year drew to a close, and his torrid summer gave way to an anemic autumn. That made him an unwilling contributor to the Mets' punchless offense down the stretch, which resulted in a 7-game skid and a stretch where the team lost 8 of 9, nearly dooming their playoff hopes. In the last scheduled game of the regular season, with a playoff berth in the balance, Piazza had a chance to play hero when he came up in the bottom of the ninth, the winning run on third and just one out. Fate conspired to make Pirates pitcher Brad Clontz uncork a wild pitch that enabled the run to score. Piazza threw up his hands in a mixture of relief and disgust.

In a wild 48-hour stretch immediately after, the Mets won a play-in game on the hostile turf of Cincinnati and took the first game of the division series against Randy Johnson and the Arizona Diamondbacks. Piazza, however, contributed little to either of these stirring victories. In game two of the NLDS, he sustained a shot to his left thumb while catching, aggravating an injury he'd suffered during the last week of the regular season when he took a foul tip off the same thumb. Piazza was given a cortisone shot to dull the swelling, but the move backfired, and his thumb swelled up even more, to the point where he could not bend it. He was forced to sit the rest of the series, which the Mets won anyway when Piazza's backup, Todd Pratt, delivered a walkoff home run in game 4.

Piazza healed sufficiently to play in the NLCS against Atlanta, but was again not much help with the bat. In the first five games of the series, he managed three meager hits, all singles, and one slim RBI, while also suffering more blows behind the plate. The worst came in game three, when Bret Boone tried to tag up and score on a fly ball to shallow center. The relay throw beat the runner by a wide margin, so Boone tried to knock the ball out of Piazza's grasp. Piazza held firm though he took a vicious pounding, slamming his head hard on the turf. Nowadays, Piazza would have left the game immediately and received treatment for a probable concussion. In 1999, he played on.

The cumulative blows of the series, and the season, soon became too much. During the 12th inning of the marathon game 5, Piazza suffered a collision with Greg Lockhart. It was far less jarring than his encounter with Boone, but it was the last straw. Before his at bat in the bottom half of the inning, he told the Mets' trainer he wanted to end the game there, but he was not up to the task. He almost staggered to the plate before striking out harmlessly against John Rocker, and finally begged out of the game. Later, he told reporters the left thumb was still bothering him, and the hand it was attached to felt "like a blowtorch." He was on the bench when Robin Ventura hit his famous Grand Slam Single that forced a game 6 in Atlanta.

After Piazza's collision in game 3, more than one reporter commented on "the glassy, dazed look" in Piazza's eyes, a sure sign of post-concussion syndrome. This was disturbingly evident during his interview prior to game 6 with NBC's Craig Sager, as Piazza stared off into the middle distance, struggling to simply maintain consciousness. All of this combined to make what happened later so wonderful.

The Mets fell behind early in game 6 by deficits of 5-0 and 7-3. In the top of the seventh, Atlanta tried to squelch any ideas of a comeback by using John Smoltz in relief. Smoltz defied this plan by giving up consecutive doubles and, after a long fly out, an RBI single that shaved the Braves' lead down to 7-5. The Mets would bring the tying run to the plate, but that run would be represented by Piazza, who all but limped to the plate, a shadow of the feared slugger he'd been just weeks ago.

And yet, when Smoltz fell behind him 2-1 and offered a fastball on the outside part of the plate, the Piazza of old emerged for one split second. Piazza took the pitch and did with it what he'd done with so many pitches during the regular season, what he did better than anyone in the league at the time. He belted it deep into right-center for an opposite field, game-tying home run. A no-doubter even.

For a moment, Piazza's adrenaline outpaced his exhaustion and he ran hard down the first base line, in case somehow the ball did not clear the fence. He even managed something close to a smile for the first time in what must have seemed like years. But once the ball did land in the seats, he lapsed into a slow trot, an almost fugue state. The noise from the Atlanta crowd collapsed into itself, a mixture of howls and stunned silence, while an astounded Bob Costas bellowed, "Tied at 7, hoping for game 7!"

The Mets would go on to improbably take the lead twice, but ultimately lost the game and the series. It is facile to say who won the game didn't really matter, because of course it did. Still, when taken in the context of Mike Piazza's season and all the pain he endured, this highlight is perhaps my favorite of all time, since it represents something beyond mere Ws and Ls. We often call athletes heroes just because they play their respective games well, which is gross misuse of the word. Mike Piazza wasn't a hero either, but on October 19, 1999, he came closer to being one than most.