How Good Must Mike Nickeas's Defense Be To Compensate For His Bat?

Share All sharing options for: How Good Must Mike Nickeas's Defense Be To Compensate For His Bat?

Mike Nickeas is not a good hitter and probably never will be. His career major-league OPS is .489 and his career minor-league OPS is .671. There is little reason to think that, at age 29, he will figure it out. It's blunt but it's true. He's on the team for his defense, which has earned praise from Mets pitchers, coaches, and front office personnel (Note: "defense" here includes pitch calling, pitch framing, pitch blocking, throwing arm, leadership, grit, clubhouse charisma, etc.). The value of catcher defense is not easily quantified; it remains a sabermetric challenge. However, thanks to other relatively reliable statistics it is possible to ballpark just how good Nickeas' defense must be to compensate for his poor offense.

Warning: The following portion of this post contains some esoteric sabermetric horseplay. Skip to the end for the conclusion if you are not interested in the guts behind the wins above replacement (WAR) metric.

By adding up the non-defense components of the WAR framework -- offense, baserunning, positional adjustment, adjustment to replacement level -- it is possible to approximate how many defensive runs above average Nickeas must be worth to reach a certain level of value. To calculate Nickeas' pre-defense WAR, I used the following assumptions:

When talking about a player's defensive talent, his full season run value is generally cited. For instance, "Carlos Beltran was a +10 center fielder in his prime" means our man Beltran saved 10 more runs than the average center fielder would have in around 150 games. In this Nickeas exercise, the assumption is that he plays about 1/3 of the season. So if he is, hypothetically, a +15 catcher, it would mean he is worth +5 runs in a season. Given this, here is a table featuring Nickeas' overall value depending on the quality of his defense. I will be nice and assume his defense is at least average: 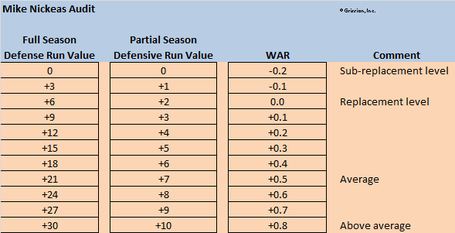 Using this admittedly imprecise system, Nickeas would have to be a slightly above-average defender to be replacement level. He would have to be a +20 defensive catcher to approach being an overall average player. Think Yadier Molina or, for a comp at another position, Andruw Jones a decade ago.

So how good is Nickeas? Slightly above-average defense/overall replacement level performance seems to be a fair assessment, based on advanced attempts to quantify catcher defense, caught stealing rates, and personal observation. That last criteria consists of watching Nickeas do his thing as well as the aforementioned praise from those in the Mets organization. It is more heavily weighted than the other criteria.

It could be the case that replacing Nickeas with an outsider -- say, the Rockies' Ramon Hernandez -- would cause the Mets' rotation to implode. Maybe his contributions truly are invaluable and it's not worth messing with the chemistry for a bump to the offense. It's possible. I don't think it's the case but it's possible. I say bring on Hernandez, who is no defensive slouch himself. We can spend all offseason discussing catcher defense if R.A. Dickey and co. crap the bed pitching to him in the second half.