The Bats Giveth, The Bullpen Taketh Away, and the Bandwagon Empties

Share All sharing options for: The Bats Giveth, The Bullpen Taketh Away, and the Bandwagon Empties 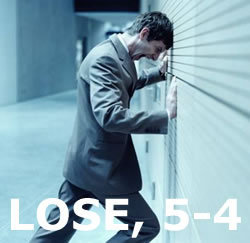 Do you remember a game from earlier this year, the Mets' first game in Washington of the season? They rallied late to take three separate leads, only to surrender that lead each time and eventually lose? You may have blocked it from your memory as a defense mechanism. I recapped that game, so it's tattooed on my memory. Even so, I didn't see tonight's game shaping up as a replay of that one until the very last moment, when it did.

This didn't look like a good game for the Mets to start with, although for entirely different reasons. Ross Detwiler garnered a start in this series over Edwin Jackson, due to the Mets left-leaning lineup, and that certainly looked like a wise decision. After breezing through the first inning unscathed, Detwiler erased a leadoff single from Scott Hairston by inducing a groundball double play off the bat of the newly returned Jason Bay. (It's like he never left!) Detwiler allowed two more singles in the frame to Ike Davis and Andres Torres, but got Mike Nickeas on a grounder to end the threat. In the third, a one-out single from Ruben Tejada went to waste on another twin killing, this time off the bat of Ronny Cedeno. In the fourth and fifth, Detwiler decided to take things much easier and set the Mets down in order.

Jon Niese matched Detwiler through the first four frames. He ceded a one-out single to Ozzie Guillen's favorite rookie Bryce Harper in the bottom of the first, then set down the next twelve batters in a row. Five of them were retired via the strikeout, while one thrown out on an amazing play in the hole by Tejada. But with one out in the fifth, Tyler Moore took a Niese fastball the opposite way and dropped just over the fence in right-center for a solo shot. After a surprise bunt single from Danny Espinosa, Niese retired the next two batters, notching another strikeout along the way.

Given a lead, Detwiler picked right up where he left off, retiring the side 1-2-3 yet again in the sixth. After Niese matched him in the bottom half, the Mets finally logged another baserunner in the top of the seventh, as a long fly from David Wright eluded Moore's glove in right and went for a double. Wright moved to third on a wild pitch, putting the tying run at third with nobody out. But Hairston struck out swinging on a pitch nowhere near the strike zone, Bay could only manage a popup to shallow center, not nearly deep enough for Wright to tag up on, and Ike Davis hit a hard grounder to second to waste a golden opportunity.

Niese once again eliminated the Nats in order in the bottom of the seventh, capping an excellent outing in which he made just one mistake, though it was one mistake too many. Despite the fact that Detwiler had pitched even better and only thrown 86 pitches, he gave way in the top of the eighth to lefty Sean Burnett. Dan Murphy (pinch hitting for Mike Nickeas) hit a one-out double off of Burnett that would have been more meaningful had the leadoff hitter, Andres Torres, been correctly called safe at first on what was ruled a groundout. It was just as well, since Torres likely would have gotten no father than third. and pinch hitter Justin Turner struck out on three pitches, followed by a groundout from Tejada to end things there.

Ramon Ramirez took over in the bottom of the eighth and retired the first two batters to face him, then gave way to Josh Edgin. The lefty walked pinch hitter Mark DeRosa (the first free pass issued by any pitcher on the night), who soon stole second. It was a costly move, as Stephen Lombardozzi fought his way out of an 0-2 hole and lashed an RBI double into left field. It put the Nats up 2-0, a deficit that, in light of the Mets' offensive anemia, felt closer 200-0.

You might have added a zero to that first number when you considered the Mets would have to rally against Tyler Clippard, who's done a great job closing for Washington since taking over that role. The Mets fought back, though, with a leadoff single from Josh Thole (just into the game), followed by another single to Wright to put the tying runs on base.

After an ugly K from Hairston, Terry Collins chose to pinch hit for the hapless Bay with Jordany Valdespin, hoping he could victimize another NL East closer. Valdespin fell behind 0-2 before watching a pitch in the dirt, then clubbing a long fly ball to right-center that cleared the fence by the thinnest of margins. The margin was so close that the umps reviewed it (because home runs are more special than anything else in the game), but it was confirmed: another pinch hit three-run homer off an NL East closer for Valdespin. Don't try to explain it; your brain won't like you.

A ninth inning rally on the road, however, means you still need three outs from your bullpen to take care of business. After Bobby Parnell got an easy flyout to open the bottom of the ninth, Michael Morse lined a single to right. With pinch hitter Ian Desmond running on the pitch, Adam LaRoche smacked a hit up the middle to put runners at the corners. Parnell knuckled down and struck out Moore on three straight curves, each one lower than the last. He got two strikes on the next batter Danny Espinosa as well, sticking with the curve the whole way until trying to sneak a low fastball by him. No dice. Espinosa reached down and laced a game-tying single to center.

Parnell got the next batter, out which brought bonus cantos, and Dan Murphy started off the 10th with an infield single against Michael Gonzalez. Terry Collins decided to let the Nats have an out on him and asked pinch hitter Kirk Nieuwenhuis bunt him up to second. Tejada followed with a long fly out, and it looked like another baserunner would go to waste until Josh Thole belted a double into the left-center gap to drive Murphy home and give the Mets the lead once more.

They failed to score more, though, which is not a wise course of action when this bullpen is entrusted with a lead (see above). Tim Byrdak started the bottom of the 10th and immediately gave up a single to rookie catcher Jhonatan (not a typo) Solano. After a sac bunt moved him to second, Bryce Harper smashed a hit well over Hairston's head in right. Solano scored easily and Harper almost as easily ran all the way to third.

With the winning run now at third, the Mets opted to walk the next two batters intentionally and load the bases. It nearly worked when Byrdak induced a gounder to first from Adam LaRoche that resulted in an out at home. Pedro Beato was brought in to face Tyler Moore, and he even got two strikes on him before nearly plunking Moore on an inside pitch. There was a different humiliating end in store for this game, however, as Beato uncorked a wild pitch. Ryan Zimmerman scored from the third, and the Nationals had a 5-4 win. Or the Mets' bullpen had a 4-5 loss; take your pick.

I think this is called either "regression to the mean" or "a huge bummer." 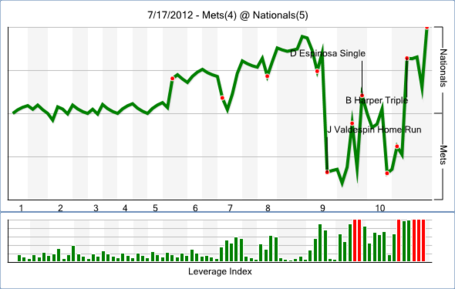