Who Are You And What Have You Done With Bobby Parnell?

Share All sharing options for: Who Are You And What Have You Done With Bobby Parnell?

There was an interesting note from last night's game regarding Bobby Parnell's use of his new favorite toy, his knuckle-curve.

I don't want to talk about effectiveness. We all know the results. I just want to speak in terms of usage. Because last night was by a wide margin the most Parnell has ever used the curve in an appearance.

Before last night's appearance, the highest percentage of his total pitches that Parnell threw his curve, according to Pitch F/X data, was 33.3% back on June 5th.* It is also worth noting that he had never thrown more curves than fastballs.

*Not including appearances of ten or fewer pitches, which are too easily skewed to discuss

Last night, however, he threw fourteen curveballs versus just eight fastballs. That represents a 63.6% curve usage, nearly double the previous high for the noted flamethrower. 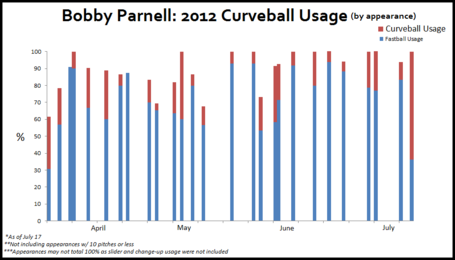 His in-game use of the pitch that he learned last season from Jason Isringhausen has mostly been limited to the 2012 season. So it's safe to say that last night was the high-water mark for his entire career.

I won't really speculate on why his usage suddenly jumped or the potential implications on his effectiveness. Obviously he allowed a run last night, but he's done that on numerous occasions this season. What's more, most of the damage was done on fastballs. So we can't really say with certainty whether the ineffectiveness was a result of the curves or not.

Again, it just seemed like a strange sidebar from last night's game that I thought I'd share, and it likely bears watching going forward.