Mets Fail To Sweep Dodgers In A Sloppy Game

Share All sharing options for: Mets Fail To Sweep Dodgers In A Sloppy Game 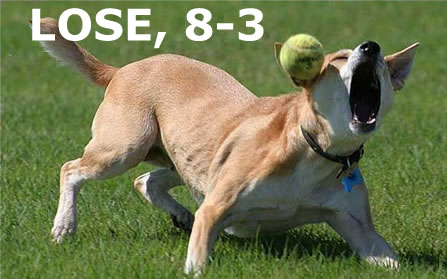 Early on, it looked like the Mets had a good shot to beat Clayton Kershaw. The Dodgers' left-handed ace was not quite on top of his game in the first inning, and the first four Mets to step into the batter's box reached base safely. Unfortunately, Andres Torres and Scott Hairston each made an out on the basepaths, and the Mets scored just one run in the inning.

In the bottom of the inning, the Dodgers got the run back on a two-out double by Juan Rivera on a ball that could have been caught by Lucas Duda. It was the first of many defensive lapses by both teams in the game.

The Mets regained the lead in the third inning when Dodgers shortstop Dee Gordon made a pair of errors, each of which resulted in a run. From then on, it was the Mets who played shoddy defense.

The Dodgers scored a pair of runs in the fifth inning. The first scored when Justin Turner, who inexplicably got the start at first base instead of Ike Davis, botched a ground ball with runners on second and third. The second run scored on a sacrifice fly by A.J. Ellis.

Los Angeles took the lead in the sixth, and they blew the doors open on the game in the seventh. Ramon Ramirez and Justin Hampson combined to load the bases with just one out in the inning, and Miguel Batista was called upon in an attempt to put out the fire. He induced what should have been an inning-ending double play on a ground ball back to the mound, but his throw, while not perfect, should have been but was not caught by Mike Nickeas. Two runs scored on the play, and the Dodgers tacked on two more after that.

Dillon Gee was neither great nor awful in the game, but his defense really did him in. Here's hoping Terry Collins is less inclined to bench Ike Davis and Daniel Murphy when there's a left-handed pitcher starting for the opposing team in the future.

The Mets are off tomorrow, but they begin a three-game set with the Phillies at Citi Field on Tuesday at 7:10 pm. Jon Niese and Vance Worley are slated to pitch. 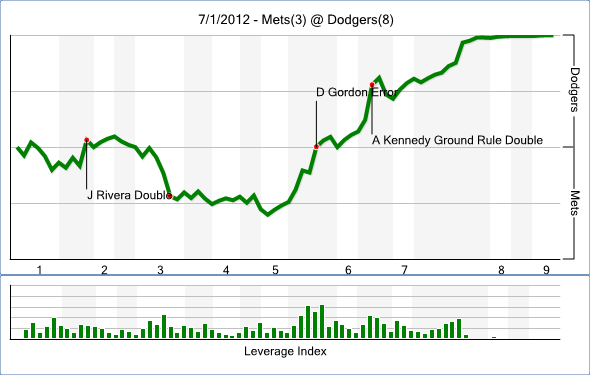